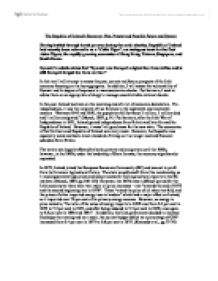 The Republic of Ireland’s Economy: Past, Present and Possible Future and Ryanair

Having battled through harsh poverty during the early nineties, Republic of Ireland had recently been referred to as a “Celtic Tiger”, an analogous term for the East Asian Tigers, the rapidly growing economies of Hong Kong, Taiwan, Singapore, and South Korea.

In this text I will attempt to assess the past, current and future prospects of the Irish economy focusing on the key aggregates.  In addition, I will assess the vulnerability of Ryanair and its degree of exposure to macroeconomic shocks.  Furthermore, I seek to advise them on an appropriate strategy to manage uncontrollable external shocks.

In the past, Ireland has been on the receiving end of a lot of economic devastation.  Pre-independence, it was the recipient of two famines in the eighteenth and nineteenth century.  “Between 1845 and 1850, the population fell by about 2 million, 1 million died and 1 million emigrated.” (Munck, 1993, p.14)  Furthermore, after the Irish War of Independence in 1921, Ireland gained independence from Britain and later formed the Republic of Ireland.  However, it wasn’t all good news for the new state.  The economies of the Northern and Republic of Ireland were very weak.  However, the Republic was especially weak and had a lower standard of living as it no longer received financial subsidies from Britain.

The nation was hugely affected by harsh poverty and emigration until the 1960s, however, in the 1960s, under the leadership of Sean Lemass, the economy significantly expanded.

In 1973, Ireland joined the European Economic Community (EC) and was set to profit from its Common Agricultural Policy.  The state would benefit from this membership as it would guarantee high prices and secure access for Irish agricultural exports to the EC markets. (Munck, 1993, pp.109-110)  However, the 1970s was a difficult period for the Irish economy as there were two major oil price increases – one “towards the end of 1973 and the second beginning late in 1979”.  These “raised the price of oil about ten-fold, and the prices of other imported energy rose in tandem” which had a major effect on Ireland, as it imported over 70 per cent of its primary energy sources.  However, as energy is price inelastic, “the ratio of the value of energy imports to GDP rose from 2.6 per cent in 1973 to 7.2 per cent in 1974, and after being reduced to 5.5 per cent in 1978, rose again to 8.8 per cent in 1980 and 1981”.  In addition, the Irish government decided to increase Exchequer borrowing and as a result, the current budget deficit as a percentage of GNP increased from 0.4 per cent in 1973 to 6.9 per cent in 1975. (Kennedy et al., pp.75-76) 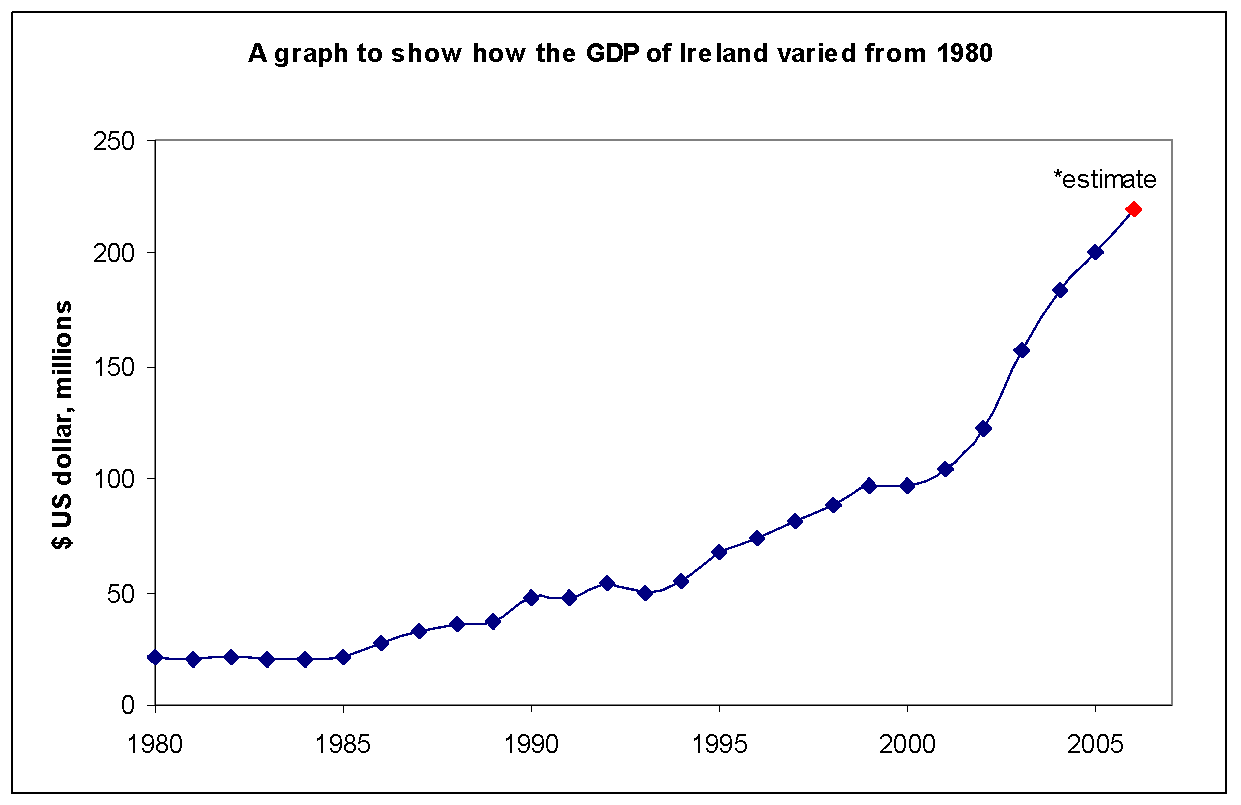 Ireland’s economy developed dramatically during the 1990s, as shown by the increasing GDP in the diagram above, and was referred to as a “Celtic Tiger” - being an analogous term for the East Asian Tigers.  This development was hugely down to a high foreign direct investment.  As a member of the EC, foreign investors would see Ireland as a potential platform to launch their products into Europe.  Also, there was a lower corporate tax rate and improved economic management.  There was “tremendous reduction in public debt from nearly 100 percent of GDP in 1991 to about 30 percent in 2004.” (International Monetary Fund, 2005) In addition, the European Union had contributed over €10 billion into Ireland’s infrastructure.

Over the past decade, the Irish government has put into operation a series of public economic programmes designed to reduce inflation; ease tax burdens; reduce government spending as a percentage of GDP and reward foreign investment.  At the beginning of 1999, Ireland joined in the introduction of the euro currency system along with the additional European Union nations.  With this, GDP growth has continued to be moderately strong, with a rate of, at least, 4 per cent since 2001 as shown by the figures below.

However, one could create an argument that there is no economic sense to have the same euro currency, thus, the same interest rate and exchange rate.  This is because some of the nations are considerably different from others.  For example, in 2002, the largest EU country, Germany, was in recession and needed low interest rates to encourage investment and consumption, and boost its economy.   Though, Ireland had been through economic boom and needed higher interest rates to avoid inflation and decrease house prices.  However, the European Central Bank’s interest rate policy is slightly partial to Germany and not Ireland.  The consequence was Ireland had low interest rates. (Granville, D., 2002)

Desmond Gillmor describes the Irish economy, especially about its openness, as “it is one of the most open of economies, as indicated by the great extent to which it is dependent on international trade and other external transactions and by the amount of movement of labour and capital across its borders.  Because of this high degree of openness, the economy is strongly influenced by the external conditions prevailing in the international economic system.” (Gillmor, 1985, p.5)

This degree of openness has allowed plenty of international trade and enabled Ireland to create such a huge trade surplus.  The Economist.com: Country Briefings website states that “in 2005 merchandise exports amounted to US$104.2bn and imports to US$67.3bn, giving Ireland the biggest trade surplus as a percentage of GDP in the OECD, except for oil-exporting Norway. Exports are dominated by foreign-owned firms in the technology and chemicals industry.”  Examples of such firms include computer manufactures Dell and Apple.  In addition, the European Headquarters of Oracle and Microsoft are situated in Ireland.  One can clearly see the openness of Ireland’s economy from the diagram below.  The sum of Ireland’s exports and imports, as a percentage of its GDP, was three times the UK’s value in 2003. 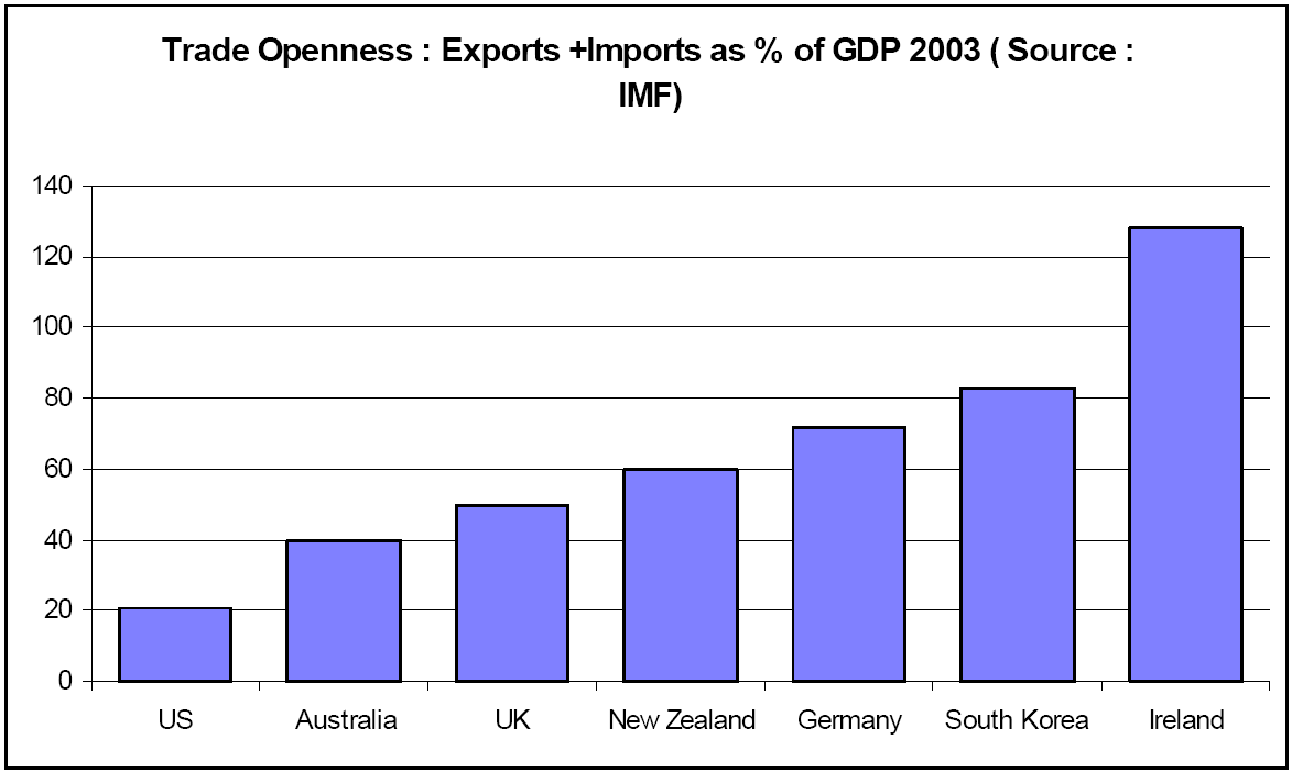 With such figures, I believe that Ireland will continue to receive foreign investment in the future and be able to maintain such surplus.  Also, I believe that the GDP growth will still continue at around the 4 per cent value.  In addition, I sense that tourism will maintain this growth with sites such as County Meath and Newgrange vital to the economy.  Colm Keena (2006) wrote in The Irish Times that “the Anderson Economic Group estimates the golf Ryder Cup which took place in 2006 will bring €43 million into the Irish economy.”  Furthermore, I believe that the smoking ban in public places imposed in 2004 would benefit the economy in the long run.  Similarly, Russell Padmore (2006) reported that Austin Hughes, chief economist with IIB Bank, said "People looking forward see an explosion in healthcare costs right across the globe," he says. "To the extent that reduced tobacco consumption will make a meaningful difference to healthcare costs in Ireland over the next 30 years, then this ban could actually make a huge saving to the economy."

One of the Ireland’s major firm and provider to its economy is Ryanair.  Ryanair is a low cost airline and one of the most profitable in the airline industry.  It offers a point-to-point, no frills (meals, seat allocation) service and aims to turn flights around inside the shortest time feasible.  In addition, its routes are consistently the shortest of all the low cost carriers.

However, even though it has had enormous success, Ryanair can be seen as vulnerable and especially exposed to macroeconomic shocks.  To a degree this is because of Ireland’s openness as Desmond Gillmor describes it as “one of the most open of economies,” and “because of this high degree of openness, the economy is strongly influenced by the external conditions prevailing in the international economic system.” (Gillmor, 1985, p.5)

The average total cost curve for airlines will reinforce the vulnerability of Ryanair in the short run due to its steepness, as shown below.  This can be explained by such high fixed costs and that a downturn in demand will cause lower profits or even a loss to the firm.

Furthermore, the graph below shows the elasticity of various sectors in the OECD (Organisation of Economic Co-operation and Development Economies), which Ireland is a part of. 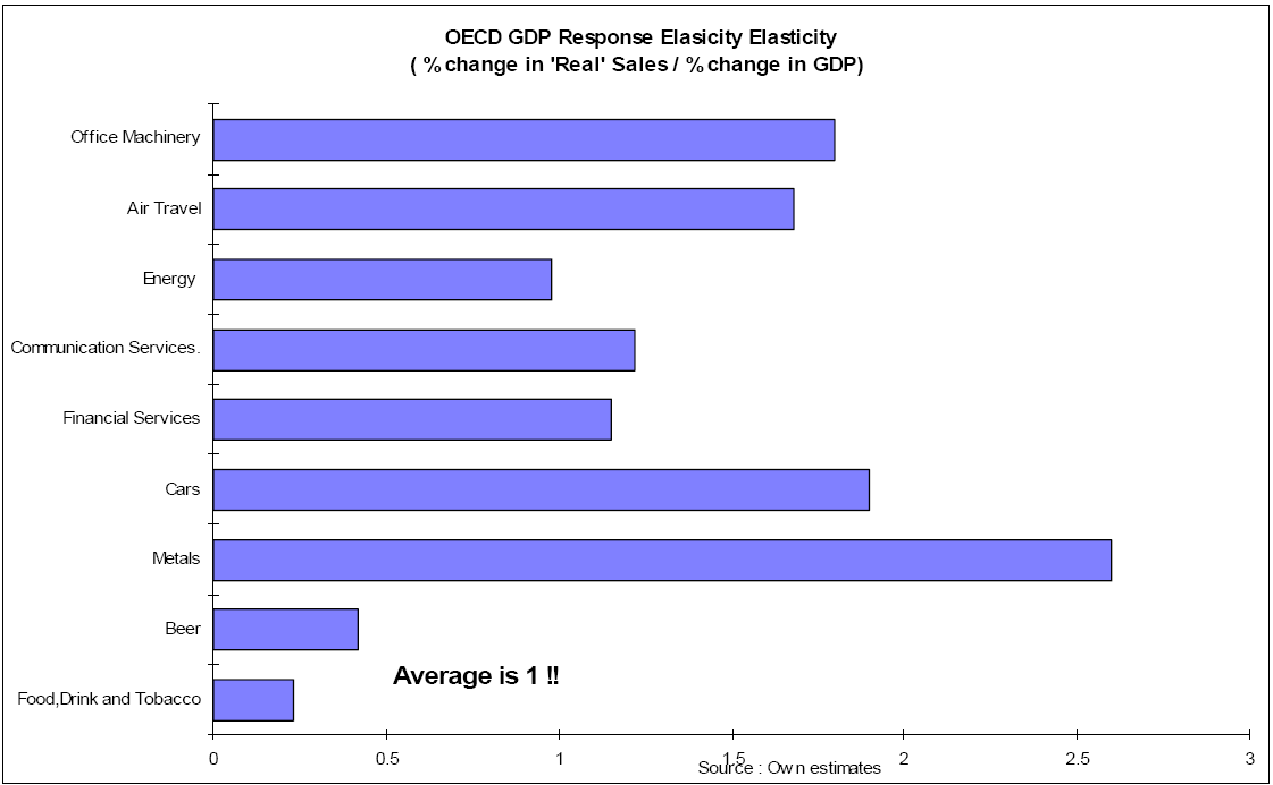 From the graph, one can clearly see that if the GDP increases or decreases by 1 per cent, the demand for air travel will increase or decrease by 1.7 per cent: air travel is fairly exposed.  Also, fluctuations in raw materials and energy prices such as oil can impact heavily on the likes of Ryanair.  However, Michael O’Leary, Ryanair’s Chief Executive, has said: “Ryanair can absorb much higher oil prices than its competitors and still offer the lowest air fares.”  Furthermore, high price elasticity in the leisure sector of airlines intensifies price competition.

British Airways, a competitor to Ryanair, has reviewed its short-haul operations and is planning to spend the bulk of its marketing budget promoting shorter haul flights.  However, they believe that services such as in-flight refreshments and business class seats are expected by their customers, and intend not to cut back on these services but focus on this differentiation.

In the journal article titled “Easyjet and Ryanair flying high on the Southwest model”, Chris Avery, an analyst at JP Morgan, believes that the answer to the threats from low cost airlines by BA has been perfect.  They acknowledged that they were no longer the public’s favored provider and have taken measures to, not only, protect their primary market, but also to learn from their rivals.

To be able to manage these uncontrollable external shocks, Ryanair needs to reduce its vulnerability and exposure to the market.  To do this in the short term, its average total cost curve needs to become gentler.  This can be explained by reducing the airline’s fixed costs and that a downturn in demand will cause profits to fall but not as much as before.

Furthermore, they could invest less in advertisement and try to offer more services to compete against BA’s new proposed plan.  Possible future implications for Ryanair’s operations strategy could include selling some airplanes from its fleet, with a possibility of the income invested in more services to offer.  Also, they could try and offshore the administrative side of the organisation to reduce more of their costs.

To conclude, having started out as an independent state with a poor economy and going through rough times such as the various famines and oil crisis, I believe that people should be proud of the Irish economy and its development through various measures.  I believe that the economy will continue to develop over time and still attract foreign investment in the future.

Granville, D., 2002, Why the euro is a mistake for Ireland. Retrieved 8 January 2007 from http://www.irishdemocrat.co.uk/window-on-the-eu/euro-mistake/