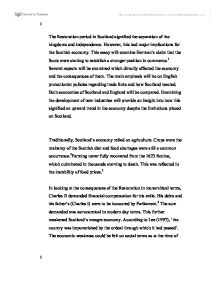 The Restoration period in Scotland.

The Restoration period in Scotland signified the separation of the kingdoms and independence. However, this had major implications for the Scottish economy. This essay will examine Herman's claim that the Scots were starting to establish a stronger position in commerce.1 Several aspects will be examined which directly affected the economy and the consequences of them. The main emphasis will be on English protectionist policies regarding trade links and how Scotland reacted. Both economies of Scotland and England will be compared. Examining the development of new industries will provide an insight into how this signified an upward trend in the economy despite the limitations placed on Scotland. Traditionally, Scotland's economy relied on agriculture. Crops were the mainstay of the Scottish diet and food shortages were still a common occurrence.2Farming never fully recovered from the 1623 famine, which culminated in thousands starving to death. This was reflected in the instability of food prices.3 In looking at the consequences of the Restoration in monarchical terms, Charles II demanded financial compensation for his exile. His debts and his father's (Charles I) were to be honoured by Parliament.4 The sum demanded was astronomical in modern day terms. ...read more.

resulted in the failure to secure any kind of agreement.17 Although the evidence does tend to suggest that Scotland's economy was in extreme difficulty, there were small signs of improvement in certain areas. The foundations were laid for relatively new industries to flourish. Some improvements were made in agriculture. E.g. areas such as Fife and Lothian incorporated a crop rotation system, partial enclosure and liming of the soil as new farming methods.18 In turn, this encouraged a migration of young people who were seeking employment.19 One of the factors which strengthened the Scottish economy, was the 1672 Act Anent Trade of the Burghs. This relaxed the monopolies of the royal burghs allowing smaller competitors to capture opportunities in the market, which their larger counterparts may have ignored.20 Subsequently, another sign of economic strength was the wave of new manufacturing outlets which became apparent during the Restoration, providing optimism within the Scottish economy. Soap and sugar factories opened in Glasgow in 1667 and 1669, earning Glasgow the title of the 'boomtown' of the 17th century.21 The coal industry steadily increased its production and signified the beginning of private enterprise industry, 'employing workers in a stable and structured environment'.22 The volume of coal exports had doubled by the 1680's.23 Glasgow was particularly significant in the upward trend of the economy. ...read more.