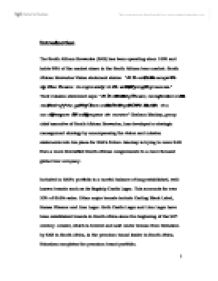 Introduction The South African Breweries (SAB) has been operating since 1895 and holds 98% of the market share in the South African beer market. South African Breweries Vision statement states: "To be ranked amongst the top three brewers in any country in the world, by any key measure." Their mission statement says: "To be a leading brewer, manufacturer and marketer of fine quality beers and other long alcoholic drinks in a socially responsible and progressive manner." Graham Mackay, group chief executive of South African Breweries, has developed a strategic management strategy by encompassing the vision and mission statements into his plans for SAB's future. Mackay is trying to move SAB from a more diversified South African conglomerate to a more focused global beer company. Included in SAB's portfolio is a careful balance of long-established, well-known brands such as its flagship Castle Lager. This accounts for over 50% of SAB's sales. Other major brands include Carling Black Label, Hansa Pilsener and Lion Lager. Both Castle Lager and Lion Lager have been established brands in South Africa since the beginning of the 20th century. Amstel, which is brewed and sold under license from Heineken by SAB in South Africa, is the premium brand leader in South Africa. Heineken completes the premium brand portfolio. By the end of 1999, SAB had become the fourth-largest brewer in the world by volume. Since SAB was a dominant force in Africa, one of SAB's goals was to grow globally by expanding into other emerging markets. Brewing operations were initiated in Europe and Asia. Several things have caused environmental or secondary problems for the company as it plans its strategic moves. These include: * Floods ravaging Southern Africa * Civil Wars (Angola, Congo, Ethiopia, & Eritrea) * Political Instability, Risk, & Volatility * The rand & regional currencies plunging against US dollar * SAB's ratings on International finance market are affected With these challenges in mind, SAB is aiming to increase globalization efforts, while making acquisitions, and competing in developed markets. ...read more.

Conduct site visits * Facilitate negotiations processes * Determine and attain capital as needed * Control every aspect of the deal including timing The current executive board of directors and strategic management team would facilitate this process. If necessary an outside merger and acquisition specialist group could be hired to facilitate the process, while still reporting to the executive board. Professional expertise and knowledge could make the process easier and bring about a more effective outcome. "How" the task of merging could be accomplished should include the following: * Develop a new strategic vision/mission to be accomplished by merger * Set objectives to be achieved by merger * Craft a strategy * Execute and Implement the strategy * Evaluate the strategy (ex: by benchmarking) This process should be initiated immediately with a long-range plan of implementation to take part in stages within a three-year period. The first stage would be the research & development stage. The second stage would be the execution and implementation stage. Lastly, the final stage would include the evaluation of the entire process. Conclusion The case of South African Breweries was, indeed, a very complicated assignment-however, it taught the authors of this paper a unique lesson. The lesson being, in order to make premeditated decisions in any organization, one must have a full visualization of where the company's actual position is in every major functioning area. The actual revelation must then be compared with the "written vision statement". Once that process is completed, the next step is to create a road map to the future destination of the company. We believe that we have made the first steps in crafting a strategy for South African Breweries by gathering the information necessary and putting it into a logical order. As armatures, it is unknown if our suggestions are focused in the proper direction-but we feel strong about the assumptions stated and the ways to implement those assumptions. Thank you for your direction in this class and have a nice summer! 1 ...read more.