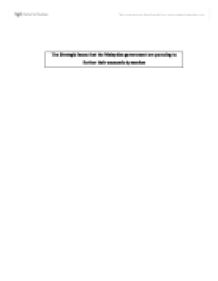 The Strategic issues that the Malaysian government are pursuing to further their economic dynamism.

The Strategic issues that the Malaysian government are pursuing to further their economic dynamism 1 Introduction The global environment is experiencing unprecedented events that had widespread implications to the world's economic situation. Despite this challenging environment, Malaysia has managed to avoid the major economic downturn. Bank Negara's report shows that growth rate for 2001 remained in positive at 0.4%, unemployment rate was contained below 4% and inflation rate was low at 1.4%. In relation to that, strategies imposed will be very important to sustain the economic growth in the country. In the next section we will look into the strategies which the government is pursuing to further strengthen their position in the region. 2 Strategies The government takes planning for national development very seriously, thus plans are important to set out the course for the nation to take in its development. The section below discusses the strategic issues that the Malaysian government is pursuing to further the country's economic dynamism. 2.1 Monetary Policy In 2001, the government has introduced the monetary measures to stimulate domestic demand to mitigate the effects of the global economic slowdown. The monetary condition in the country has remained conducive to support domestic economic activities amidst low inflation. The low interest rate environment, ample liquidity conditions and strengthens banking system have contributed to higher financing expansion in monetary aggregates. ...read more.

The moderate inflation was due mainly to the prevalence of excess capacity in several sectors of the economy, the moderate appreciate of Ringgit versus the non US currencies as well as lower imported inflation. In year 1998 which was during the economic crisis, Malaysia still managed to have a relatively low inflation rate as compared to the neighboring country such as Indonesia and Philippines. Malaysia was then at 5.3% of inflation rate, while Indonesia was at 77.6% and Philippines was at 9.7% which were so much higher than Malaysia. Therefore, Malaysia's government's strategy in lowering the inflation rate in the country had indeed managed to help the country to overcome the crisis sooner than the other neighboring countries. 2.5 Role of Private Sector The government has encouraged private sector to be more proactive in helping to boost up the economic dynamism in the country. This includes a close alliance between the government and the private business sector and privatizing state enterprises. The private sector has to invest in new technology, training and human resource development to help the economic growth. It has to set on conducting research and development to find improved and more efficient production methods, new markets, new products and new application for existing products. ...read more.

3 Conclusion Malaysia has one of the fastest growing economies in the world. The national vision to make Malaysia a fully developed nation by year 2020 will see a profound shift towards industrialization, leading to the creation of an affluent society. Malaysia has influenced the Asia Pacific economic activities in the region by having a stable political environment, strong economic fundamentals, good Balance of Payment, good financial system, low unemployment rate, good education system and good infrastructure. The government's strategy in developing the nation's economy has been successful in improving the country's productivity level. The strong economic fundamentals and pragmatic measures taken by the government has lessened the impact of the economic slowdown and averted its extreme effects such as massive unemployment, starvation, collapse of the corporate sector and civil unrest. Malaysia has embarked on an ambitious plan to leapfrog into the Information Age by providing intellectual and strategic leadership. This means investing in an environment that encourages innovation, helping companies, both Malaysian and international companies, to reach new technology frontiers, partnering global IT players and providing the opportunities for mutual enrichment and success. However, Malaysian must be prepared for a serious global economic downturn and thus apply greater efforts to liberalize and restructure the economy to increase productivity. This will make Malaysia more competitive and resilient against growing external and internal threats and challenges. Given the resolute leadership and strong public support, Malaysia shall overcome these tribulations and advance forward. ...read more.