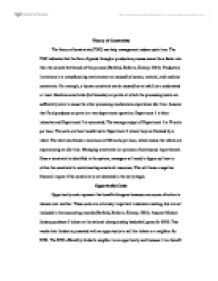 The theory of constraints (TOC) can help management reduce cycle time. The TOC indicates that the flow of goods through a production process cannot be a faster rate than the slowest bottleneck of the process

Theory of Constraints The theory of constraints (TOC) can help management reduce cycle time. The TOC indicates that the flow of goods through a production process cannot be a faster rate than the slowest bottleneck of the process (Barfield, Raiborn, Kinney, 2001). Production limitations in a manufacturing environment are caused by human, material, and machine constraints. For example, a human constraint can be caused by an inability to understand or react. Machine constraints (bottlenecks) are points at which the processing levels are sufficiently slow to cause the other processing mechanisms experience idle time. Assume that Ford produces car parts in a two-department operation: Department 1 is labor intensive and Department 2 is automated. ...read more.

Opportunity Costs Opportunity costs represent the benefits foregone because one course of action is chosen over another. These costs are extremely important in decision making, but are not included in the accounting records (Barfield, Raiborn, Kinney, 2001). Assume Michael Jordan purchases 2 tickets to the national championship basketball game for $500. Two weeks later Jordan is presented with an opportunity to sell his tickets to a neighbor for $700. The $700 offered by Jordan's neighbor is an opportunity cost because it is a benefit that Jordan will sacrifice if he chooses to watch the basketball game rather than sell the tickets. Opportunity cost is useful when evaluating the cost and benefit of choices. ...read more.

Each cash flow from the project is discounted to its present value using the rate specified by the company as the desired rate of return (Barfield, Raiborn, Kinney, 2001). This information allows managers to eliminate any projects they are considering if they are producing a negative NPV. A nonnegative NPV makes the project acceptable for investment. The NPV method can also be used to select the best project when choosing among investments that can perform the same task or achieve the same objective. Financial mangers can use the NPV when making decisions about mergers and acquisitions. Assume IBM could spend $1.5 million on Investment A or $1 million on Investment B. Investment A's and B's NPV's are $10,000 and $5,000, respectively. If the financial managers are only comparing NPV's, Investment A would be the better investment for IBM because it has a higher NPV. ...read more.