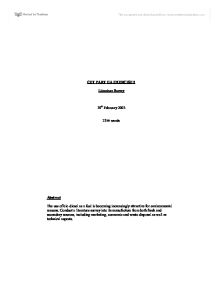 The use of bio-diesel as a fuel is becoming increasingly attractive for environmental reasons - Conduct a literature survey into its manufacture from both fresh and secondary sources.

CET PART IIA EXERCISE 5 Literature Survey 10th February 2003 2156 words Abstract The use of bio-diesel as a fuel is becoming increasingly attractive for environmental reasons. Conduct a literature survey into its manufacture from both fresh and secondary sources, including marketing, economic and waste disposal as well as technical aspects. The Challenges and Opportunities in Bio-diesel in the 21st Century Introduction Dr. Rudolf Diesel developed the diesel engine in 1895, intending to run it on a variety of fuels, including vegetable oil. In 1912 Diesel said: "he use of vegetable oils for engine fuels may seem insignificant today. But such oils may become in course of time as important as petroleum and the coal tar products of the present time". Vegetable oil is too viscous to be use in its raw form, since it can solidify in cold conditions, and cause blockages and locking of moving parts. For an engine to use raw oil it needs to be modified so that it can run on conventional fuel during start-up so the engine is warm before it switches to run on vegetable oil. Before the engine is turned off, it must be flushed through with petrol to remove any remaining vegetable oil. ...read more.

The methanol is mixed with the sodium hydroxide in an exothermic reaction to form sodium methoxide. This is added to the oil, whilst the mixture is constantly stirred. The reaction proceeds fairly quickly, with most of the reactants being used up within the first half an hour. The reaction products will consist of a solid glycerine phase (by-product) and a liquid biodiesel phase. The products should be left to settle for at least several hours before the biodiesel can be siphoned off. Manufacture from Waste Oil Using waste oil to produce biodiesel is slightly more complicated. The waste oil may contain water, and an unknown amount of fatty acids may have been produced when the oil was cooked. The present of water will cause problems with the sodium hydroxide and increase the likelihood that a soap like substance is formed. The water can be removed by heating the oil above 100 �C and letting the water boil off. This must be done under constant stirring to prevent the formation of water pockets that may explode under the surface of the oil. The correct amount of sodium hydroxide to be used can be determined from a simple titration. A sample of the oil is taken, and is titrated with a solution of sodium hydroxide. ...read more.

This, however, wastes what could be a useful substance. Germany is trying to avoid the excess production of glycerine by looking in to alternative methods of production of biodiesel. Conclusion The environmental benefits of using biodiesel certainly do make it appeal as an alternative fuel. Since there is very little difference between the performance of biodiesel compared to ordinary diesel, it may seem like the ideal replacement for fossil fuels has been found. Biodiesel is also much safer to handle, since its flash point is much higher than the petroleum based diesel. It is also non-toxic and biodegradable, meaning it has almost no impact on the environment. The main problems arise with the economics of biodiesel production and the availability of resources. For it to be able to compete with conventional diesel, the costs of its manufacture must be significantly reduced, especially since petroleum diesel is one of the cheapest fuels available. At the rate that diesel is currently being consumed, biodiesel will not be able to replace the ordinary diesel as a consumer fuel. There is simply not enough land available to grow the crops that are required to produce the oil needed to turn in to biodiesel. For this reason, another source for biodiesel has to be found. Alternatively, to make biodiesel the fuel of the future, a method of reducing its rate of consumption needs to be investigated. ...read more.