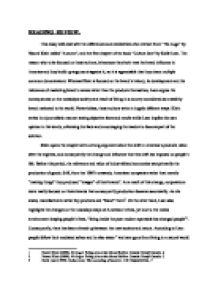 This essay will deal with the differences and similarities of an extract from No Logo by Naomi Klein called Autumn, and the first chapter of the book Culture Jam by Kalle Lasn. The reason why to be focused on the

READING REVIEW. This essay will deal with the differences and similarities of an extract from " No Logo" by Naomi Klein called "Autumn", and the first chapter of the book "Culture Jam" by Kalle Lasn. The reason why to be focused on these authors, is because they both treat the brand influence in America and they build up arguments against it, so it is appreciable that they share multiple common denominators. Whereas Klein is focused on the brand�s history, its development and the relevance of marketing brand�s names rather than the products themselves, Lasn argues the consequences on the nowadays society as a result of living in a country considered as a wealthy brand marketed to the world. Nevertheless, these authors write in hugely different ways. Klein writes in a journalistic manner stating objective facts and results while Lasn implies his own opinion in his words, criticising the facts and encouraging the readers to become part of the solution. Klein opens the chapter with a strong argument about the shift in America�s products value after the eighties, and consequently the change and influence that this shift has imposed on people�s life. Before this period, the relevance and value of industrialized economies was primarily the production of goods. Still, from the 1980�s onwards, American companies rather than merely "making things" they produced "images" of their brands1. As a result of this change, corporations were vastly focused on theirs brands that consequently production became secondarily. ...read more.

Another Klein focal point -besides related with the idea of people�s immunity due to the abuse of advertising- is that agencies kept on advertisement development and consequently it appeared an advertising investment wheel where as she supports "the more you spend, the more your company is worth14". As a result, the spending on advertising increased steadily leading to a world where nothing has been left unbranded. Likewise, Lasn also writes about the establishment of an unstoppable consumption wheel on America�s society that as he says is driving people�s culture and making them sick15. However, whereas Klein is focused on the advertising wheel that is adding value to the companies brands, Lasn explains that people are experiencing a consumption wheel where the more they get the more they want. According to Lasn, the guilty party of this consumer behaviour is precisely due to the constant rise on advertising that Klein argued. So, basically both different wheels mentioned by the two authors are related, yet one -consumption wheel- is the consequence of the other -advertising wheel. Moreover, according to Lasn the unique result of the abusive advertising conduct by companies is the increase on consumer�s dissatisfaction that is making theirs lives shallow and meaningless16, and subsequently is polluting people�s mental environment. Afterwards, Klein argues about the appearance of the seemingly brand crisis era . She says that it seemed to be the beginning of a period where price reductions were the aim rather than putting resources into fabulously expensive ad campaigns17. ...read more.

The issue is, who is behind that power abuse? As it is clearly seen in the "Economic Hitmen28" multinationals and brands are, and there is lack of awareness by people of the situation. Customers do not think when they purchase for instance brand trousers that they might have been sewn by kids that are exploited and work in illegal conditions. In my view, the world we live in is just leaded for a few powerful people that they even control the economy. A good example of this situation would be the documentary of "The Inside Job" where it is criticized that economists knew that the crisis would happen, but still were on the sideline, due to the circumstances and also factors such as money. "Economics faced lots of opposing critics, so many economic specialists were on the side of the banks, allowing the financial crisis to occur in 200829". This shows that we live in a world that is dominated by money and not by critical thinking. To this point, I ask myself, where are people�s moral values? Do we not consider them important any more? Do we really take them into account in our daily decisions? In my opinion, we do not realise how out of our control everything that involves money is becoming and the lack of sensitiveness that this branded world has led us to. In conclusion, our world is developing to the point where everything has been created, invented and manipulated but what marketers might not have realised about is that people are becoming immune to all types of advertisements and these would create in my opinion a new challenge for marketers to re-promote their brands. ...read more.