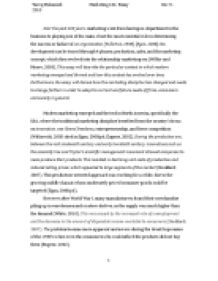 This essay will describe the particular context in which modern marketing emerged and thrived and how this context has evolved over time.

﻿Tareq Mohamed Marketing 101: Essay Dec 9, 2013 Over the past 100 years, marketing went from having no department in the business to playing one of the main, if not the most essential role in determining the success or failure of an organization (Fullerton, 1998) (Egan, 2008). Its development can be traced through 4 phases; production, sales, and the marketing concept, which then evolved into the relationship-marketing era (Wilkie and Moore, 2003). This essay will describe the particular context in which modern marketing emerged and thrived and how this context has evolved over time. Furthermore, the essay will discuss how the marketing discipline has changed and needs to change further in order to adapt to current and future needs of firms, consumers, and society in general. Modern marketing emerged and thrived in North America, specifically the USA, where the traditional marketing discipline benefited from the country?s focus on innovation, neo-liberal freedoms, entrepreneurship, and fierce competition (Witkowski, 2005 cited in Egan, 2008:p6, Eugene, 2002). During the production era, between the mid nineteenth century and early twentieth century, innovations such as the assembly line and Taylor?s scientific management movement allowed companies to mass-produce their products. This resulted in declining unit costs of production and reduced selling prices, which appealed to large segments of the market (Stoddard, 2007). This production-oriented approach was working for a while, due to the growing middle class at whom moderately priced consumer goods could be targeted (Egan, 2008:p6). However after World War I, many manufacturers found their merchandise piling up in warehouses and on store shelves, as the supply was much higher than the demand (White, 2010). ...read more.

The use of technology to give consumers the chance to participate in the market offering can lead to increased customer satisfaction (O'Malley and Patterson, 1998). For instance, the new John Lewis Christmas ad created a massive social media buzz, and to involve the consumers even further, John Lewis asked its customers to record their own version of the song “Somewhere Only We know” will air on Christmas day (Forde, 2013). This connection between the firm and consumers can lead to a long-term win-win relationship (Zineldin, 2000). Moreover, marketing discipline should aim at satisfying the individual needs of consumers. Hence using of social media to interact and understand individual customers and their expectations through mutually beneficial dialogue (Zineldin, 2000), thus allowing firms to customize their products, services, and communications according to the individual needs. This is seen in Nike’s personalized shoes, and websites such as Google and Facebook that create personalized web pages for individuals (Smith, 2006). In addition no single theory or model should be used to practice marketing, as none of them can include all relevant elements and fit every situation, hence they becomes obsolete; even RM isn’t suitable for every situation and every business (Prothero and O'Malley, 2004). For example, RM is not recommended for tourist shops, as they should focus on single sales and product features rather than customer retention. Finally, “business schools lag businesses in the adoption and implementation of best practices in marketing to the point current marketing education is out of touch with reality” (White, 2010). Even with all the criticism against it and the absence of it in real businesses, schools are still teaching the 4Ps as the basis of marketing (Grönroos, 1994). ...read more.