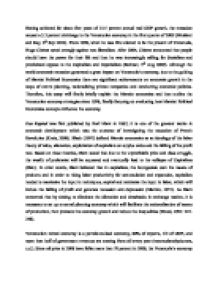 This essay will firstly briefly explain the Marxist economics and then outline the Venezuelan economy strategies since 1998, finally focusing on evaluating how Marxist Political Economics concepts influence the economy.

Having achieved for about five years of 13.5 percent annual real GDP growth, the recession caused a 3.3 percent shrinkage to the Venezuelan economy in the first quarter of 2009 (Weisbrot and Ray, 6th Sep 2010). From 1998, when he was first elected to be the present of Venezuela, Hugo Ch�vez acted strongly against neo-liberalism. After 2004, Ch�vez announced that people should have the power for their life and then he was increasingly calling for Socialism and proclaimed oppose to the Capitalism and imperialism (Bohmer, 5th Aug 2009). Although the world economic recession generated a great impact on Venezuela's economy, due to the guiding of Marxist Political Economics there are significant achievements on economic growth in the ways of centre planning, nationalizing private companies and conducting economic policies. Therefore, this essay will firstly briefly explain the Marxist economics and then outline the Venezuelan economy strategies since 1998, finally focusing on evaluating how Marxist Political Economics concepts influence the economy. Das Kapital was first published by Karl Marx in 1867; it is one of the greatest works in economic development which was the outcome of investigating the causation of French Revolution (Kreis, 2008). Black (1997) defined Marxist economics as an ideology of the labor theory of value, alienation, exploitation of capitalists on surplus value and the falling of the profit rate. Based on these theories, Marx stated that due to the unprofitable price and class struggle, the wealth of proletariat will be squeezed and eventually lead to the collapse of Capitalism (Ibid.). ...read more.

In other words, the governments are aiming to meet the public interest and increase the company's efficiency by focusing on increasing PDVSA's efficiency and profitability, so that the company can create efficiency uses of resources and benefit government treasury and development continuously (Ibid.). The actions have not yet stopped. Under the selected growth strategy and central planning system, a number of industries in Venezuela were nationalized, including electricity, communications and even the oil industry (Economywatch, n.d.). On July 31st, Ch�vez announced to take over a financial institution: Banco de Venezuela, which is owned by Spain's Grupo Santander (The Economist, 7th Aug 2008). The ''new'' restructured bank will face burdensome objectives, namely, set the interests rate, spend half of subsidized rate of loan on farmers and housing (Ibid.). It can be noted that, the government is extending its control over key public sectors, which led to a hesitation of continuing investment in oil giants, including Chevron, BP and ExxonMobil (Economywatch, n.d.). Although the process of nationalization may likely to result in a significant effect on foreign investment, central planning promotes the efficiency of use of resources and mobility of capital (Millar, 2004). Overall, since in the early part of the recovery, it is rather difficulty for government, and the achievements of Ch�vez's government is very successful (Weisbrot, Ray and Sandoval, 6th Feb 2009). In 2003, by establishing currency controls and set exchange rate at 2.15 bolivars per dollar, the government was about to control capital flight and inflation (Suggett, 3rd Jan 2011). ...read more.

As well as the contribution of private firms, GDP increased by 2.5 percent to 14.2% from 1998 to 2007 (Ibid.). ''One central aspect of 21st century socialism is that it increasingly meets the needs of the Venezuelan people.'' which stated by Bohmer (5th Aug 2009) Additionally, based on a report from the UN Economic Commission on Latin America, Venezuela has achieved the sharpest reduction in inequality in the Americas during this expansion which makes it the most equal distribution of wealth in Latin America (Weisbrot, M and Ray, R. 6th Sep 2010). In conclusion, it can be summarized that on the basis of Marist Political Economics, the government started with nationalize the giant oil corporations so that it enables the company operates more efficiently and accumulating more capital. Then by taking over the financial institutions, the government extends the power in key sectors and allows large deal of capital mobilizing towards investment in domestic markets. More importantly, having control over the exchange rate let the country benefit more on import which led to the achievement of surplus on current account. The Venezuelan economy is predicted to be growing with the condition of high levels of aggregate demand, which based on the improvement in employment, living standards, poverty reduction, and income equality. It is important to emphasis that though the Marxist Political Economics did create some problems, with its guiding, all these government policies have achieved great contribution to enhance the possibilities of working class access to the public life. ...read more.