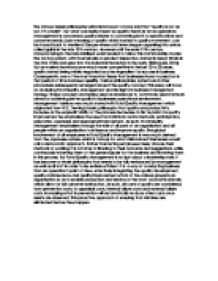 The famous Greek philosopher Aristotle is known to have said that "quality is not an act, it's a habit". But what was really meant by quality then? As far as operations management is concerned, quality relates to conforming both to specifications and customer needs. Such meaning of quality which has led to quality movement, can be traced back to medieval Europe where craftsmen began organising into unions called guilds in the late 13th century. However until the early 19th century, manufacturing in the industrialised world tended to follow this craftsmanship model. The factory system, with its emphasis on product inspection, started in Great Britain in the mid-1750s and grew into the Industrial Revolution in the early 1800s (ASQ, 2010). But as markets have become much more competitive in the last 20 to 30 years, quality started being widely regarded as a key ingredient for success in business. Consequently, one of the most important issues that businesses have focused on in that period of time has been quality. Various philosophies, systems and other procedures subsequently emerged around the quality concept. This essay will focus on analysing Total Quality Management and Six Sigma's business management strategy. These concepts are hereby used as references to commonly used methods aimed at achieving better quality in businesses operational environment. Management fashions very much started with Total Quality Management which originated from W.E. Deming's basic philosophy that quality and productivity increase as the unpredictability of the process decreases. In his 14 points for quality improvement he emphasises the need for statistical control methods, participation, education, openness and purposeful improvement. As such, Total Quality Management emphasises strongly the role of all parts of an organisation and all people within an organisation to influence and improve quality. ...read more.

"Innovation is, by its very definition, based on the idea that the value resides in the introduction of something unexpected," says Dev Patnaik, a principal at Jump Associates, a design strategy firm in San Mateo, California. When it comes to the breakthrough product, or the game-changing strategic shift, Six Sigma fans can "have all the wrong reflexes," says Rita Gunther McGrath, a Columbia Business School management professor (Bloomberg Business Week, 2006). But a technology company must be innovative if it is to remain competitive. Motorola marries Six Sigma and innovation by giving free reins to designers, while dedicated members of the team keep the process close at hand, to make sure a ground-breaking project meets a measurable customer demand and gets built to quality standards. Unlike some companies newer to Six Sigma's esoteric methodology, Motorola has people who accept it as part of the culture. Veterans are used to so- called project hoppers offering input at various stages in product development. Others agree that Six Sigma and innovation don't have to be a cultural mismatch. At Nortel Networks for instance, CEO Mike S. Zafirovski, a veteran of both Motorola and Six Sigma stalwart General Electric, has installed his own version of the programme, one that marries concepts from Toyota Motor's lean production system. The point, says Joel Hackney, Nortel's Six Sigma guru, is to use Six Sigma thinking to take superfluous steps out of operations. Running a more efficient shop, he argues, will free up workers to innovate. In terms of innovation, although as just illustrated with the example from Motorola it is somehow possible to allow a level of innovation with quality process managements, common-sense would initially refers to them as natural deterrent. ...read more.

While philosophies, concepts and methodologies are widespread to assist organisations and their operations departments improving their quality approach, this essay proves that there is not one simple recipe for success in this regard. Although we have seen that the approach to choose can be selected based on the kind of organisation in question, the precise type of service or product it offers, the size of the organisation and the readiness of its employees and managers will also be dictating the best model to adopt, as well as the level of adaptation required before implementation of such a model in the overall business. It also seems realistic to believe that as time passes and markets as well as technology evolve, new quality management approaches, methodologies and processes are likely to surface. As a commercial-minded individual who has been spending most of the past 7 years in a sales and marketing division of a service company, learning about quality management in operations has been mind-opening. Although my experience occasionally leans towards operations management, especially when it comes to being involved in technical projects or product launch, my understanding of operations used to relate almost exclusively to manufacturing. However, further to following the Operations Management's lectures and heavily researching the subject of quality management in operations management, I have learnt a great amount about this concept and how it can be adapted to my area of expertise. Firstly, when I am asked to deliver a quality service, I would always simply be thinking of providing perfection. But it seems that I never asked myself the right question. Indeed, regardless of how good the service is, what truly matters is how the customer perceives the quality of the service. ...read more.