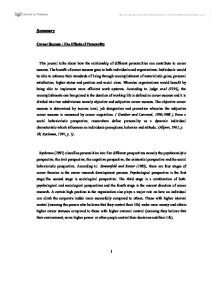 This journal talks about how the relationship of different personalities can contribute to career success. The benefit of career success goes to both individuals and organizations.

Summary Career Success : The Effects of Personality This journal talks about how the relationship of different personalities can contribute to career success. The benefit of career success goes to both individuals and organizations. Individuals would be able to enhance their standards of living through accomplishment of materialistic gains, personal satisfaction, higher status and position and social class. Wherelse organizations would benefit by being able to implement more efficient work systems. According to Judge et.al (1995), the accomplishments one has gained in the duration of working life is defined as career success and it is divided into two subdivisions namely objective and subjective career success. The objective career success is determined by income level, job designation and promotion wherelse the subjective career success is measured by career acquisition. ( Gattiker and Larwood, 1990,1988 ).From a social behavioristic perspective, researchers define personality as a dynamic individual characteristic which influences an individuals perceptions, behavior and attitude. (Allport, 1961, p. 28; Ryckman, 1997, p. 5). Ryckman (1997) classifies personalities into five different perspectives namely the psychoanalytic perspective, the trait perspective, the cognitive perspective, the existential perspective and the social behavioristic perspective. According to Sonnenfeld and Kotter (1982), there are four stages of career theories in the career research development process. ...read more.

There is also some disagreement in practical value theories where it may restrain theory development process (Brief and Dukerich, 1991; Zald, 1993). In Bandura's criticism, he states that individuals carry certain traits which will influence their consistent behavior under different circumstances and there is obstruction of the traditional viewpoint by the mechanistic models of an earlier period of personality development. Based on the practical implications, the conservative point of view states that there is very limited studies done on personality and its effect on career success. Despite research was carried out saying that personality traits play a significant role on the development of career success, people were not able to change their behaviour for career advancement. For individuals, personality alteration, changes and able to identify their strengths and weaknesses can help them in enhancing themselves and create a better career success (Bandura, 1997). Organizations are responsible in recruitment and promotion of employees and training to enhance skills of employees. Therefore, the human resource department plays a major role in this and can upgrade and improve their systems and strategies ( Aryee et al., 1994). Career consultants can deal with clients who are going through career related problems such as stagnation or transition in their careers and they can use the personality traits to guide them to a well defined path. ...read more.

It also has a great impact on overall productivity in a social workplace. Cognitive ability however has been shown to be more positively correlated to actual task performance. From this fact, I agree that personality comes into play because if one is unwilling to perform the task and lacks conscientiousness, then the job will not get done regardless of potential ability. As a conclusion, I believe that all the personality traits mentioned in this journal play a prominent role in determining a person's career success and fulfilling their needs for achievement and power. Organizations and individuals can use these personality traits as a guidance for corporate ladder success. REFERENCES 1) John W. Boudreau, Wendy R. Boswell & Timothy A. Judge , 1999 , Effects of Personality on Executive Career Success in the U.S and Europe , viewed on 20th February 2011, <http://digitalcommons.ilr.cornell.edu/cgi/viewcontent.cgi?article=1110&context=cahrswp> 2) Sean P .Nubert , 2004 , The Five Factor Model of Personality in the Workplace , viewed on 21st February 2011, <http://www.personalityresearch.org/papers/neubert.html> 3) Mandy M. Shell & Sheila D. Duncan , 2000 , The Effects of Personality Similarity between Supervisors and Subordinates on Job Satisfaction , viewed on 21st February 2011, <http://clearinghouse.missouriwestern.edu/manuscripts/177.php> 4) John W. Lounsbury, Robert P. Steel, Lucy W. Gibson , 2008 , Personality Traits and Career Satisfaction of Human Resource Professionals , viewed on 23rd February 2011, <http://info.ecareerfit.com/eCareerFit/CareerSatisfaction_HRProfessionals_final2.pdf> CONTENTS CONTENTS PAGE NO. ...read more.