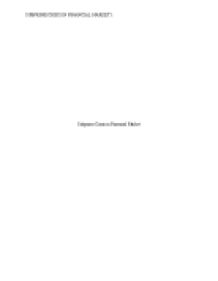 This paper analyzes the reasons of the subprime crisis in mortgage financing occurred in 2007 and the impacts of the crisis on the overall financial system.

﻿SUBPRIME CRISIS IN FINANCIAL MARKET Subprime Crisis in Financial Market Abstract This paper analyzes the reasons of the subprime crisis in mortgage financing occurred in 2007 and the impacts of the crisis on the overall financial system. The subprime crisis in US is caused by excessive amounts of loans made to people who could not afford them, and also the investors who were very eager for high return put excessive amounts of money into the mortgage. There are a number of factors in generating crisis, such as legislations like Community Reinvestment Act, low rate of interest, mortgage brokers and lenders, rating agencies, etc. Subprime crisis relates to three important dimensions, which are poor regulation of investment banks, relaxation in lending standards led by greedy unbridled competition and failure of the asset market to realize the dues from the defaulter. When subprime crisis occurred, consumer spending is down, the housing market has plummeted, foreclosure numbers continue to rise and the stock market has been shaken, which drag not only the United State but also the global economy into a recession. ...read more.

These mortgage-backed securities are, in turn, often sliced and diced into different structures, for example, a Collateralized Debt Obligation (CDO). Thus CDOs are pools of bond securities that are grouped together to help diversify risk. The different tranches of these structures are assigned a risk rating by the rating agencies such as Moody?s, Standard & Poor?s, and Fitch based on various parameters. They are subsequently sold by Wall Street firms to institutional investors worldwide ? mutual funds, banks, hedge funds, central banks and pension funds. The information provided above lists the agents involved the US housing mortgage market, and it will help to identify who were hit by the crisis. There are house purchasers, real estate agents, mortgage lenders, wall-street firms, rating agencies, and investors. The second cause of the subprime crisis is mortgage securitization which creates multiple principal agent problems. Securitization is viewed as bank ?disintermediation?, but the fact is that it replaces one middleman by several. In the traditional model, there is only one middleman between the lender and the borrower, the bank. However, mortgage securitization brings principal agent problems. One problem is between the depositors and the banks, and another is between the banks and the borrowers. ...read more.

The sub prime crisis is the result of excessive amounts of loans made to people who could not afford them and excessive amounts of money thrown into the mortgage arena by investors who were very eager for high-yielding investments. It fed the real estate mania, the real estate bubble in many parts of the country. The bubble prices in the US housing market were caused by: ? Lax lending standards. ? Low treasury rates on adjustable rate mortgages. ? Speculative behavior by consumers. Interest paid on residential mortgages in the US is linked to US Federal Reserve Fed Funds Rates. Between 2004 and 2006, because of incipient inflation in the US economy, the Fed increased its Fed fund rate1 from 1% all that way to 5.25% and the discount rate2 from 2% to 6.25%. Because of this, holders of residential mortgages saw their payments on their house loans rise. This rise in rates was a disaster in the making for banks that gave loans to sub prime borrowers. Defaults on sub-prime mortgages turned out more Reference Bass, B. M. (1990). Handbook of Leadership: Theory, Research and Managerial Applications 3rd Edition. New York: The Free Press. Pierce J., & Newstrom, J.W. (2011). Leaders & the Leadership Process: Readings, Self- Assessments and Applications (6th Edition). The United States:McGraw-Hill. ...read more.