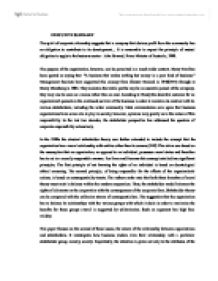 This paper focuses on the nature of the relationship between organizations and stakeholders. It investigates how business leaders view their relationship with a particular stakeholder group, namely, society - Coca Cola India.

EXECUTIVE SUMMARY The spirit of corporate citizenship suggests that a company that derives profit from the community has an obligation to contribute to its development.... It is reasonable to expect the principle of mutual obligation to apply to the business sector - John Howard, Prime Minister of Australia, 1998. The purpose of the organization, however, can be perceived in a much wider context. Henry Ford has been quoted as saying that: "A business that makes nothing but money is a poor kind of business." Management theorists have supported this concept from Chester Barnard in 1938(FN5) through to Henry Minztberg in 1983. They maintain that while profits may be an essential pursuit of the company, they may also be seen as a means rather than an end. According to Handy the desirable outcome for an organization's pursuits is the continued survival of the business in order to maintain its contract with its various stakeholders, including the wider community. Most commentators now agree that business organizations have some role to play in society; however, opinions vary greatly as to the nature of this responsibility. In the last two decades, the stakeholder perspective has addressed the question of corporate responsibility extensively. In the 1980s the classical stakeholder theory was further extended to include the concept that the organization has a moral relationship with entities other than its owners.(FN8) ...read more.

According to Britain's leading poisons expert, Professor John Henry, consultant at St Mary's Hospital in London, immediate steps should be taken by the authorities in India to ban the practice immediately. The levels of toxins found in the samples would, he said, cause serious problems - polluting the land, local water supplies and the food chain. "The results have devastating consequences for those living near the areas where this waste has been dumped and for the thousands who depend on crops produced in these fields," Professor Henry said. Cadmium is a carcinogen and can accumulate in the kidneys, with repeated exposure possibly causing kidney failure. Lead is particularly dangerous to children and the results of exposure can be fatal. Even at low levels it can cause mental retardation and severe anaemia. Professor Henry said: "What most worries me about the levels found is how this might be affecting pregnant women in the area. You would expect to see an increase in miscarriages, still births and premature deliveries." This has resulted in many protests in India, and one such example is when over a thousand community members adversely affected by Coca-Cola marched to the Coca-Cola factory premises in Mehdiganj, near the holy city of Varanasi in India demanding that the factory shut down. ...read more.

At the conclusion of its first advisory board meeting in December 2003, Coca Cola India announced that it had decided to establish India Environment Council to guide the company on various environment-related matters. The decision to form the India Environment Council was made in New Delhi this week at the first meeting of the newly formed India Advisory Board of the company. Justice B N Kirpal, a former chief justice of India, has agreed to lead the council as its chairman. The team's focus will be to help Coca-Cola implement and maintain it environmental plans and policies. However, if the formation of the advisory committee was designed to deflect attention, it was of little help when two days after its first meeting the Kerala high court ordered the company to stop extracting groundwater for its bottling plant near Plachimada village. The ruling followed a 608 day long protest by local villagers who complained the water extraction by Coca Cola was so great it was drying their rice paddies out and killing their coconut palms. Coca-Cola undertook an environmental impact assessment and it is understood that the sludge waste from the plant was fertiliser and said the company complied with all local environmental laws and stood for the welfare of the community. It is difficult to ascertain how sucessful the efforts taken by the Management would help Coca-Cola regain its postitive image in India, however its is being aggressive in its drive. ...read more.