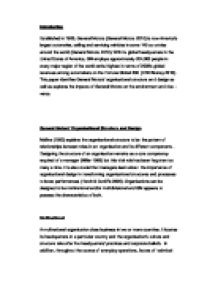 General Motors' constantly emphasizes on doing what is best for customers in order to serve them better. GM has also indicated that dealership and customers are of their greatest importance. Globalisation Globalisation describes an ongoing process by which regional economies, societies, and cultures have become integrated through a globe-spanning network of communication and trade (Daft 2007). Globalisation has emerged to be an almost conspicuous and often debated aspect of today's society. GM's stability in the global economy is indeed a remarkable feat and much of it has to be attributed to its efforts in the intercontinental market. Two considerable elements will stimulate globalisation (Daft 2007). First and foremost, the concept of market-oriented investment suggests that a company's expansion capacity beyond its local frontiers will be fundamental in increasing profitability. Equipped with facilities in most corners of the globe, the GM brand is able to function effectively as a lone, collective and assimilated automotive giant. Evidently, General Motors have sold more cars outside the United States than within America itself (General Motors 2010). Secondly, asset-oriented investment demands that human resources be exploited for the fact that they are not proportionate geographically. GM, being the perfect example of capitalising on this characteristic, has been attracting foreign talent into its diverse team for more than a decade. Expertise in the form of engineers and scientists have been scouted from North and South America, Europe, the Middle East, China, Taiwan, India, and Korea to satisfy the world's growing hunger for developed automation. ...read more.