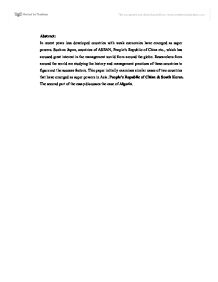 This paper initially examines similar cases of two countries that have emerged as super powers in Asia: People's Republic of China &amp; South Korea.The second part of the essay discusses the case of Algeria.

Abstract: In recent years less developed countries with weak economies have emerged as super powers. Such as Japan, countries of ASEAN, People's Republic of China etc., which has aroused great interest in the management world from around the globe. Researchers from around the world are studying the history and management practices of these countries to figure out the success factors. This paper initially examines similar cases of two countries that have emerged as super powers in Asia: People's Republic of China & South Korea. The second part of the essay discusses the case of Algeria. INTRODUCTION: As commerce becomes more global, large numbers of people are conducting business across national and cultural boundaries. The increase in the popularity of international business has lead to the interest in International Human Resource Management. When a company operates business across international boundaries it comes across various Management systems which have evolved over the years. HRM practices are different in different countries around the globe, according to Boxall; International HRM is concerned with the human resource problems of multinational firms in foreign subsidiaries. The study of Human Resource Management in less developed countries has been receiving increasing attention in the past few decades. The rise of Japan as the second powerful economy of the world, and the emergence of the People's Republic of China as a powerful economy in Asia has attracted major attention from many researchers around the world. ...read more.

The liberalisation of the rewards system: Under the new reforms companies are allowed to "freely determine the scale of wages and bonuses according to each employees work skills, work intensity, work responsibility, working condition and actual contribution" (Min Chen). After the reforms were introduced the pay was also increased; it also introduced the bonus system. "Before the present reforms were introduced, the ideology behind the Chinese pay policy was to keep the rates of pay as low as possible and to use normative or symbolic rewards as performance incentives." (Branine) The case of South Korea (hereafter referred to as Korea): In the last few decades Korea has transformed it self from an agricultural country to a highly industrialised nation. It is one of the members of the four little dragons of Southeast Asia. Korea lacks natural resources and in the absence of natural resources, Korea's strong labour force has served as the foundation of its modern economic development. Korean population is highly educated with almost 98% of the population knows to read and write. Koreans place great importance on education of their workforce, and most of the Korean graduates prefer to go into higher education. "Korea's HRM system was seen by many as playing an integral role in this waxing and waning of the economy as in turn has influenced by the cultural milieu" (Rowley & Bae 2002: 530). The Korean management system is very similar to that of the Japanese management system, but they tend to show some notable differences to. ...read more.

If the job is for a manager there are certain characteristics that a manager should posses before applying for a job such as good language skills in French even though the national language is Arabic and all applicants should have a decent legible handwriting. (Branine 2001) "In a society such as Algeria, where un-or-under employment is the norm, work takes on a meaning that is radically different from that in advanced industrial countries. 'In such a context, competition for a job is the foremost form of the struggle for existence; a struggle which, for some begins each morning in anxiety and uncertainty." (Ian Clegg 1971:171) Training & Development: According to Branine the level of training given to employees varies from one organization to another, some of them don't emphasise on staff training at all. "The decision on who should or should not be on a training programme is made by managers who normally see training as a cost to the organization and a favour to their employees rather than as an investment for the future. Budgets for training are very limited...." (Branine 2002: 143) Conclusion: These countries discussed above dint have any terms and concepts of the west such as Personnel and Human Resource Management. But the management systems of Korea and China are dynamic in their own way and have contributed to the development of new and strong economies of the 21st century. The traditional and cultural beliefs of these countries have exerted powerful influence on the formation of the two management systems. ...read more.