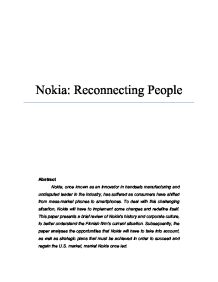 This paper presents a brief review of Nokias history and corporate culture, to better understand the Finnish firms current situation. Subsequently, the paper analyses the opportunities that Nokia will have to take into account, as well as

Nokia: Reconnecting People Abstract Nokia, once known as an innovator in handsets manufacturing and undisputed leader in the industry, has suffered as consumers have shifted from mass-market phones to smartphones. To deal with this challenging situation, Nokia will have to implement some changes and redefine itself. This paper presents a brief review of Nokia's history and corporate culture, to better understand the Finnish firm's current situation. Subsequently, the paper analyses the opportunities that Nokia will have to take into account, as well as strategic plans that must be achieved in order to succeed and regain the U.S. market, market Nokia once led. Table of Contents Introduction 2 Nokia 3 History 3 Culture 4 Market & Position 4 The U.S. Mobile Phone Market 6 Sophisticated market 6 Trend for smartphones 6 U.S. Operators 7 Subsidies 7 Locked/unlocked phones 7 The competitors 10 Opportunities 11 Data usage 12 4G networks 12 M-commerce 12 Code Division Multiple Access 13 Strategic Challenges 13 Nokia and Microsoft: The Third Ecosystem 14 Moving Faster 17 Dealing with Operators 18 Smartphone Virgins 18 Suppliers Bargaining Power 19 Conclusion 21 References 22 Introduction Nokia has sold a total of 97.9 million mobile units in the second quarter of 2011. While this may sound impressive, this is down from 111.5 million units from the second quarter of 2010. This resulted in a decrease of global market share from 30% to 22.8%. Also, their Symbian operating system decreased from a global market share of 40.9% to a 22.1% (Rooney, 2011). Although the third quarter results in 2011 exceeded analyst expectations, Nokia reported net losses. They also reported net losses for the second quarter (Lawton & Moen, 2011). Despite the poor performance of Nokia, a few of their competitors have achieved growth in recent years. Nokia's new strategy is to revitalize their product portfolio and also re-establish itself in the North American market. Earlier this year, Nokia announced a partnership with Microsoft. ...read more.

The Near Field Communication (NFC) technology allows users to pay for goods and services using their cell phones and is heavily promoted by Google on the Android platform. NFC enables mobile payments, which is paying by touching the payment terminal with an NFC enabled device. Google Wallet is an application on Android that stores a virtual version of credit cards that can be used to pay. An NFC enabled device can also purchase transit fares, movie and concert tickets, or serve as a boarding pass. Some NFC enabled devices can give users coupons. Besides touch required transactions, catalogue merchants can receive orders from mobile devices, and sometimes deliver via mobile devices too. ABI Research is predicting that in 2015, $119 billion worth of goods and services will be purchased via a mobile phone (Wikipedia, 2011). Mobile financial services such as banking and brokerage are also feasible. Banks and other financial institutions allow customers to access account information and make transactions using mobile services. Mobile reverse auction is also viable. The reverse auction bills the bidder's phone every time they place a bid. With functions of mobile devices expanding, security issues are more and more important to consumers. Viruses and malwares that attack mobile systems or steal private information will pose greater threats to phone users. Code Division Multiple Access This network technology for mobile phones, also known as CDMA, is becoming increasingly popular in the U.S. CDMA is a "spread spectrum" technology, allowing many users to occupy the same time and frequency allocations in a given band/space. CDMA assigns unique codes to each communication to differentiate it from others in the same spectrum. In a world of finite spectrum resources, CDMA enables many more people to share the airwaves at the same time than do alternative technologies. The CDMA air interface is used in both 2G and 3G networks. In other words, this technology allows numerous signals to occupy a single transmission channel, optimizing the use of available bandwidth. ...read more.

All these problems led to a decrease in revenue for supply companies (Lawton, 2011). Some companies as STMicroelectronics, a semiconductor company, saw the sales of its wireless division fall in the second quarter after Nokia issued a profit warning in May due to its poor performance in smartphone sales. Texas Instruments, another semiconductor vendor, is also suffering because of Nokia. According to Strategy Analytics, last year the Dallas-based company shipped 85% of its application processors to Nokia, covering 93% of Symbian smartphones. This could be a great opportunity to sign new contracts, and lower the prices of handset components. As showed before, these companies such as the semiconductor vendors have great dependence in their customer, as it is the case with Nokia and Texas Instruments. This dependence could lead to increase Nokia's bargaining power over suppliers, and now more than ever because the smartphone market is expected to grow fast in the following years. Conclusion The global smartphone industry is changing fast, there is no time for hesitation when companies have to take decisions. As shown before, Nokia has been in trouble dealing with this situation. Despite the fact that the Finnish firm is the world's leader handset manufacturer by volume, Apple and Google's Android are the market's big players in terms of profit. They know that smartphones are software, not hardware. Nokia also knew it, and it tried to compete with its own platform, Symbian. However, Nokia's platform was not as successful as the competitors'; this fact reflects Nokia's poor market share in the smartphone market, primarily in the U.S. However, not everything is lost. The new alliance between Nokia and Microsoft is the solution to Nokia's problems. Both companies have complementary skills and the means to develop a new ecosystem which will compete with Apple and Android, the market leaders. This is not easy to undertaken. But implementing the measures previously provided as well as catching all the new opportunities will provide Nokia with the necessary means to succeed in the North American smartphone market. ...read more.