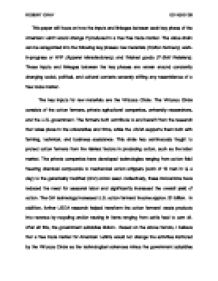 This paper will focus on how the inputs and linkages between each key phase of the American t-shirt would change if produced in a true free trade market.

This paper will focus on how the inputs and linkages between each key phase of the American t-shirt would change if produced in a true free trade market. The value chain can be categorized into the following key phases: raw materials (Cotton Farmers), work-in-progress or WIP (Apparel Manufacturers), and finished goods (T-Shirt Retailers). These inputs and linkages between the key phases are woven around constantly changing social, political, and cultural contexts severely stifling any resemblance of a free trade market. The key inputs for raw materials are the Virtuous Circle. The Virtuous Circle consists of the cotton farmers, private agricultural companies, university researchers, and the U.S. government. The farmers both contribute to and benefit from the research that takes place in the universities and firms, while the USDA supports them both with farming, technical, and business assistance. This circle has continuously fought to protect cotton farmers from the riskiest factors in producing cotton, such as the labor market. The private companies have developed technologies ranging from cotton field freezing chemical compounds to mechanical cotton strippers (work of 10 men in 1/2 a day) ...read more.

The race to the bottom argued that the surplus of inexpensive labor in China threatened workers worldwide, as international competition applied downward pressure on wages and working conditions in other countries in order to be competitive. While the competitive market forces were strong, there were also opposing forces at work. These opposing forces of conscience, religion, and politics have been governments, labor unions, religious leaders, student activists, and the workers themselves. Together these forces have actually been cooperators and improved the human work condition at the bottom. Based on the these factors, I believe that a free trade market for American t-shirts would not change the linkages from raw material to WIP by slowing down the race to the bottom. I say this because if we remove the 16.5% apparel tariff for ALL importing countries (thus creating a free trade market), the pace of the race to the bottom would eventually be triggered by a country with the desire to capture more of the U.S. ...read more.

The intent of these quotas was to preserve the U.S. apparel manufacturing industry, but the reality was that global technological innovations were reducing the jobs, not foreign imports. The positive side effect of the quotas was significant development in several low cost countries to due restriction on how much could be imported by the larger countries such as China. By establishing a free trade market and removing the quotas imposed on China, the low cost behemoth would drastically increase its market share of the U.S. apparel consumer market, force out countries that were only granted access due to the Chinese quotas, and significantly damage the unintentional American t-shirt free trade market created, excluding China. In summary, I believe that the protectionism currently utilized by the U.S. apparel would have the following result if a free trade market for t-shirts were established: no significant changes would be realized in the inputs of raw materials and the linkages to WIP. Dynamic changes in the linkages to the finished goods phase would ultimately result in a more restricted trade market with fewer countries having access to the U.S. apparel market. ?? ?? ?? ?? ROBERT GRAY 001-85-0139 ...read more.