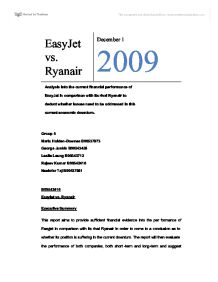 This report aims to provide sufficient financial evidence into the performance of Easyjet in comparison with its rival Ryanair in order to come to a conclusion as to whether its position is suffering in the current downturn. The report will then evaluate

EasyJet vs. Ryanair December 1 2009 Analysis into the current financial performance of EasyJet in comparison with its rival Ryanair to deduct whether issues need to be addressed in this current economic downturn. Group 5 Maria Holden-Downes B00537973 George Junkin B00543458 Leslie Leung B00343712 Rajeev Kumar B00542416 Neelofar Taj B00537981 B00542416 Easyjet vs. Ryanair Executive Summary This report aims to provide sufficient financial evidence into the performance of Easyjet in comparison with its rival Ryanair in order to come to a conclusion as to whether its position is suffering in the current downturn. The report will then evaluate the performance of both companies, both short-term and long-term and suggest whether the Finance Director of Easyjet needs to be worried about the company's long-term viability. This will be achieved through the CORE analysis strategy by Moon and Bates (1993). Using ratios to analyse the financial statements will allow us to make important findings and discover what issues to need be addressed. Finally recommendations will be made for Easyjet in order to better their position. Note: All figures are taken from Easyjet and Ryanair's financial statements available at www.easyjet.com and www.ryanair.com respectively. See Appendix 1 and 2 for the statements relating to the financial years 2007 and 2008. All ratios were analysed using these statements and previous years', see Appendix 3 for the spreadsheet. Note?: Figures for Ryanair have been converted using the ratio �0.80:�1.00 Note??: The financial year for Easyjet starts in September whereas Ryanair's starts in March. Introduction The importance of this report is the current issues surrounding the state of the economic climate and the fact that both companies operate in the same market sector, offering low cost flights to a variety of European airports, putting them in direct competition. Crucially this report will identify significant changes between the financial statements and attribute this to world events such as increasing fuel tax or company mergers. ...read more.

Another key occurrence in the last financial year was Ryanair's purchase of 29.82% shares of Aer Lingus, which could be set to increase if Ryanair are successful with their next bid (ExecDigital). This should have had a similar effect to the Easyjet acquisition but financial figures fail to coincide with this theory. As you can see from the following graph, Easyjet's total revenue grew by 31.5% to �2362.8 million between September 2007 and 2008. This shows a positive result of the recent structural changes and indicates a higher level of revenue than Ryanair, who's reached just �2171.06. However, the graph below shows that operating profit for the same year decreased by 47% compared to Ryanair who's profit increased by 14%. This could be down to GB Airways integration costs for Easyjet of �12.9 million and other additional acquisition costs (Appendix 1) and the fact that a few of Ryanair's major expenses for the year were not included in operating expenses such as the loss on impairment of an asset available for sale (Appendix 2). Ratios So far this report has given a summarised view of the financial performance of Easyjet in comparison with its rival Ryanair, but by simply looking at figures such as sales and profits it is difficult to interpret their situation appropriately (Smart et al., 2008. Pg.43). In order to gain a better perspective of whether Easyjet is in fact suffering due to the economic climate and indeed has to worry about the performance of its competitor, this section will take a further look into the financial statistics of both companies by using ratios to effectively analyse the data. Profitability, efficiency, long term liquidity, short term liquidity and coverage ratios will be used at is believed that these best illustrate the position of both firms, starting with those which provide evidence that Easyjet have reason to believe they are performing adequately in the economic situation. ...read more.