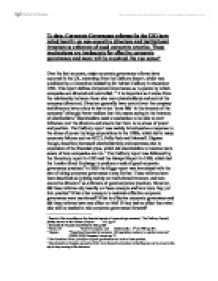 To date, Corporate Governance reforms have relied heavily on non-executive directors and institutional investors as enforcers of good corporate practice - These mechanisms are inadequate for effective corporate governance and more will be required - Do yo

To date, Corporate Governance reforms (in the UK) have relied heavily on non-executive directors and institutional investors as enforcers of good corporate practice. These mechanisms are inadequate for effective corporate governance and more will be required. Do you agree? Over the last ten years, major corporate governance reforms have occurred in the UK, stemming from the Cadbury Report, which was published by a Committee headed by Sir Adrian Cadbury in December 1992. This report defines Corporate Governance as 'a system by which companies are directed and controlled.'1 It is important as it stems from the relationship between those who own (shareholders) and control the company (directors). Directors generally have control over the company and directors have a duty in law in act 'bona fide' in the interests of the company2 although Farrar realises that this means acting in the interests of shareholders.3 Shareholders need a mechanism to be able to exert influence over the directors and ensure that there is no abuse of power and position. The Cadbury report was mainly introduced as a response to the abuse of power by large corporations in the 1980s, which led to many corporate failures such as BCCI, Polly Peck and Maxwell. Dignam though, describes increased shareholdership and awareness due to expansion of the financial press, which led shareholders to become more aware of how companies are run.4 The Cadbury report was followed by the Greenbury report in 1995 and the Hampel Report in 1998, which led the London Stock Exchange to produce a code of good corporate governance practices5 in 2003 the Higgs report was introduced with the aim of taking corporate governance a step further. ...read more.

Even though events like these are rare it shows that if institutes and individuals want to manipulate they can. The US response was to publish the Sarbanes-Oxley act introducing tough new penalties for companies with up to 20 years imprisonment for directors. Perhaps this is what is needed in the UK with a regulator equivalent to the Securities and Exchange Commission to oversee corporate governance in the UK with powers to punish those that are ineffectively governed if this could be deemed. Another response could be to encourage companies to become more socially responsible by developing stakeholder relationships26. This may cause problems with the primary relationship that managers should put shareholders first. There are arguments that long term shareholder value can only be achieved through short term stakeholder relationships.27 Perhaps this together with the introduction of penalties perhaps contained in legislation holds the key to better corporate governance in the future. 1 Report of the committee on the financial aspects of corporate governance ( The Cadbury Report ) Hereby known as the Cadbury Report s2.5 pg 13 2 Re Smith & Fawcett Ltd [1942] Ch 304 pp306 3 Farrar, JH Farrar's Company Law Butterworths 4th ed 1998 pp 381 4 Dignam "Exporting Corporate Governance: UK regulatory systems in a global economy" (2000) 21(3) Company Lawyer pp 72 5 The Combined Code: principles of good governance and code of best practice. 6 Non-Executive Directors primarily differ from Executive directors in that they are not involved in the day to day running of the business. 7 Cadbury Report 21.8 pp 10 8 9 10 11 A1.4 12 13 14 15 16 17 18 19 20 21 22 23 24 25 26 27 ...read more.