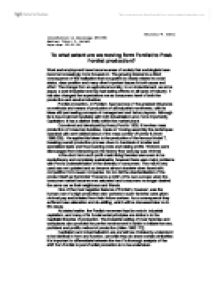 To what extent are we moving form Fordist to Post-Fordist production?

Patricia W. Curmi Introduction to Sociology SP1130C Seminar Tutor: U. Wolski Date due: 20.01.03 To what extent are we moving form Fordist to Post-Fordist production? Work and employment have become areas of society that sociologists have become increasingly more focused on. The growing interest is a direct consequence of the realisation that occupation is closely related to social status, class position and many other important issues in both cause and effect. The change from an agricultural society, to an industrial and, as some argue, a post-industrial one has had lasting effects on all types of industry. It has also changed the expectations we as consumers have of both the production and service industries. Fordist production, or Fordism, has had one of the greatest influences on methods and means of production of all industrial movements, with its ideas still permeating concepts of management and factory layouts. Although its is bound almost inevitably with both industrialism and, more importantly, Capitalism, it has a distinct entity within the market place. Conceived and developed by Henry Ford in 1908, it involves mass production of consumer durables, made on 'moving assembly line techniques operated with semi-skilled labour of the mass worker' (Fulcher & Scott 1999:528). He applied his ideas to the production of the famous Model T, breaking overall production process down to hundreds of smaller and specialised tasks and thus lowering costs and raising profits. Workers were discouraged from interacting on the factory floor and pay was minimal. ...read more.

Durkheim (cited in Allen 1992:165) later argued this point, believing instead that a growing division of labour actually created a new interdependence between workers and created a sense of participation in a common enterprise, hence increasing the sense of meaningfulness to the individual worker. His organic solidarity theory used the organic analogy of highly specialised organs functioning in harmony for the greater purpose to illustrate his stance. Yet he also admitted that such division of labour is only meaningful if people carry out a freely chosen task according to their ability, something which was not allowed within the Fordist model. Blauner (1964) further developed Marx's theory of alienation, which were sometimes accused of being too vague to facilitate any real measurement of the phenomenon, with his own research study. According to Blauner there were four historically significant stages of production which all still existed today: craft production, machine based factory production, assembly plant production and automated production. He proposed that alienation did exist, but to differing degrees within the confines of separate industries. While some of the techniques used in his chosen industries of study (printing, textile, automobile and chemical production) the main principles behind each one remains unchanged. He aimed to show the four ways in which the work situation could effect the worker: powerlessness, meaninglessness, isolation and self-estrangement. These were observed through the use of pre-ordained indicators, e.g. powerlessness was manifested by a lack of control over employment and so on. ...read more.

In the social context of work itself there is a trend for the social integration of managers and their staff and even a common uniform worn by all to eliminate perceived divisions between higher and lower levels of employees. Basset (1987) found these principles translated into the British work system with the single union agreements and binding arbitration agreements (where a neutral arbitrator referees internal conflicts). There was also a move towards consultation and participation in the form of worker committees who were separate from any union organisation. Unskilled and semi-skilled labourers also received equal conditions of employment and benefits. The move from increasing worker power is aided by the evolution of post-industrialism, signified by the switch in consumer demand from the production industry to the service industry, teachers and I.T. workers for example. Such 'white collar workers' contribute a higher level of skill and thus demand greater control over their working conditions. More scope is given to technological advances and the subsequent need for constant diversification and upgrading of both machines and labourers, making the Fordist model somewhat redundant. Changes such as these highlight the gradual shift from Fordist to post-Fordist modes of production, however one should not underestimate the vast weight carried by Fordism for capitalist employers as an effective method of profit maximisation. Fordist production offers lucrative short-term economic and technological gains, and the recent influx of part-time workers has opened up a market for the re-emergence of the assembly line industries which once epitomised the banality and worker dissatisfaction of Henry Ford's own factory. ...read more.