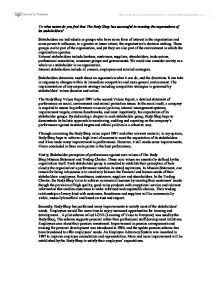 To what extent do you feel that The Body Shop has been successful in meeting the expectations of its stakeholders?

To what extent do you feel that The Body Shop has successful in meeting the expectations of its stakeholders? Stakeholders are individuals or groups who have some form of interest in the organisation and some power to influence, to a greater or lesser extent, the organisation's decision making. These groups can be part of the organisation, and yet they are also part of the environment in which the organisation operates. External stakeholders include bankers, customers, suppliers, shareholders, trade unions, professional association, consumer groups and governments. We could also consider society as a whole as a stakeholder in an organisation. Internal stakeholders include all owners, employees and salaried managers. Stakeholders determine much about an organisation what it can do, and the directions. It can take in response to changes within its immediate competitive and more general environment. The implementation of any corporate strategy including competitive strategies is governed by stakeholders' values decision and action. The Body Shop Values Report 1997 is the second Values Report, a detailed statement of performance on social, environment and animal protection issues. In the social audit, a company is required to assess its performance on social policies; internal management systems; improvement targets; external benchmarks, and most importantly, the expectation of its stakeholder groups. ...read more.

Furthermore, The Community Trade programme aims at long-term, sustainable relationships and is one way of using trade as a mechanism for communities to benefit through employment, income, skills development and social initiatives. The third, survey is a good way to find out how satisfied and dissatisfied their stakeholders were. One of the most important and sensitive processes in social auditing is the engagement of stakeholder representatives in dialogue. It is especially important to identify salient issues for each group in face-to-face conversation before conducting wide-scale surveys of opinion. Surveys were done using the largest manageable sample size; respondents completed the questionnaires anonymously and returned them to an independent organization for confidential analysis. By the survey Body Shop could see the progress made on stakeholders' issues. Most issues by employees to do with job satisfaction are pretty well. From the franchisees' survey, most of franchisees were satisfied with what the company doing right now. Feedback of suppliers' survey suggested that the Body Shop should help share best practice and expertise among suppliers. This evolved into the Better Business Forum for Suppliers to the Body Shop, launched in 1997.A survey and focus groups were organized for shareholders in 1995, survey shows most of the shareholders think the Body Shop's efforts to increase non-financial disclosure are in shareholders' long- term interests. ...read more.

*42% said that price might make them buy less from the Body Shop. Shareholders *96% agree that The Body Shop takes active steps to make its business more environmentally *88% said they have not corrupt behavior by our staff *87% agree that Body Shop's terms and condition are fair. *83% agree payments are made on time. *83% agree that our non-animal testing policy was explained to them clearly and efficiently *8%say they have experienced corrupt behavior by our staff Suppliers *Nobody else tries to impose environment rule restraints on anybody, The Body Shop are by far and away the most forceful in their approach. *Body Shop are try to do quite a good things, but some of them a little bit idealistic. *The main complaint about The Body Shop is this slight unpredictability about what's going to happen. *Body Shop should practice and expertise among suppliers. TABLE 2 Survey Feedback in the 1996/1997 Stakeholder 1994/95 Focus Group 1994/95 Survey 1996/97 Follow-up Dialogue 1996/97 Survey 1997/98 Survey UK Employees Yes Yes Yes Yes Yes US Employees Yes UK Franchisees Yes Yes Yes Yes US Franchisees Yes Yes Yes Yes UK Customers Yes Yes US Customers Yes Suppliers Yes Yes Yes Community Trade Suppliers Yes Shareholders Yes Table 1. Social audit stakeholder consultation sine 1994 ...read more.