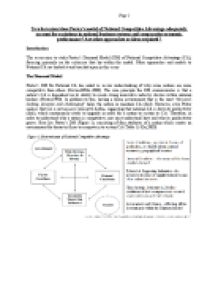 To what extent does Porters model of National Competitive Advantage adequately account for variations in national business systems and comparative economic performance? Are other approaches or ideas required?

﻿Page To what extent does Porter?s model of National Competitive Advantage adequately account for variations in national business systems and comparative economic performance? Are other approaches or ideas required? Introduction This essay aims to study Porter?s Diamond Model (DM) of National Competitive Advantage (CA), focusing primarily on the criticisms that lay within the model. Other approaches and models to National CA are looked at and touched upon in this essay. The Diamond Model Porter?s DM for National CA has aided us in our understanding of why some nations are more competitive than others (Davies&Ellis;2000). The core principle the DM communicates is that a nation?s CA is dependent on its ability to create strong innovative industry clusters within national borders (Porter;1990). In addition to this, having a home environment that is the most ?forward-looking, dynamic and challenging? helps the nation in maintain CA (ibid). However, even Porter realises that CA is not an easy concept to define, suggesting that national CA is down to productivity (ibid), which continuously needs to upgrade in order for a nation to sustain its CA. Therefore, in order to understand why a nation is competitive, one must understand how and why its productivity grows. Here lies Porter?s DM (Figure 1), consisting of four attributes of a nation which creates an environment for domestic firms to compete in to sustain CA (Table 1) (Oz;2000). All the six elements interact with each other to create a dynamic environment for firms to compete, with Porter believing that those industries that are advanced in all the determinants are likely to be more competitive than the industries who are only partially advanced in the determinants. The Criticisms Such an influential model is subject to criticisms that make apparent the key problems. The following section breaks down the model and looks at similar issues, illustrating with use of nations, industries and firms as examples. Historical Aspects Although Porter states that if a nation has advantages in each determinant it will perform well economically; what is unclear is how a nation grows to be in that position. ...read more.

Moreover, Reich (1992) suggests that specialized skills (such as problem-solving and identifying) are being traded between nation?s more than actual finished products (Lazonick;1993) Dunning?s (1992) contribution to globalization views MNCs influential power over Government decision-making. Furthermore, he recognises that CA is now gained via knowledge and technology, which can be transferred between nations quite easily. Gupta & Govindarajan (2000) state the main reason for the existence of MNCs is down to the ability they have in efficiently transferring and exploiting knowledge in a ?intra-corporate context?, however recognise that the ?tacitness? of knowledge acts as a barrier in this transfer and reproduction (ibid). As will be seen below, China?s encouragement of inwards FDI via joint-ventures has aided in its deployment of foreign management skills and technological adaptations, which will in effect increase the competitiveness of the nation. Apple Inc. for example, is recognized globally as a MNC, being one of the leaders in the electronics and computer software industries. Its international success is supported by its established 294 stores worldwide, yet the manufacturing of the majority of its products is outsourced to China, while the majority its design team works within in the US. As can be seen, Apple has taken advantage of resources globally, with superior human resources around the US and UK, and cheap labour within China. As supported by Reich (1992), workers in one nation can work alongside others in another nation by combining skills together to give customers the best value. As can be seen, a strategy to aid CA lies in the exploitation of benefits in other nations? CA. Another criticism of the DM is Porter?s narrow definition and approach to FDI, implying that inward FDI is not as beneficial for a country as outward FDI (Grein&Craif;1996). Additionally, it is argued by Dunning (1993) that there exists a lack of ?globalization of economic activity? within the DM, as FDI?s importance is not covered in the four determinants (Gugler&Brunner;2007). ...read more.