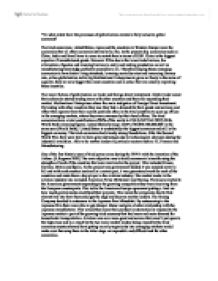 To what extent have the processes of globalization created a fully inclusive global economy?

"To what extent have the processes of globalization created a fully inclusive global economy? The triad economies, United States, Japan and the countries in Western Europe were the economies that all other economies strived to be like. In the present day, economies such as China, India and Brazil have to come to match then in terms of GDP. China is the biggest exporter of manufactured goods. However if this due to the lower trade barriers, the elimination of quotas and lowering barriers to entry and making production as well as manufacturing knowledge perfectly accessible to all. Therefore helping these emerging economies to have better living standards, lowering mortality rates and increasing literacy rate, or has globalisation led to big Multinational Enterprises to grow so freely in the name of equality, they are now bigger than most countries and in actual fact are actually exploiting these countries. The major factors of globalisation are trade and foreign direct investment. Global trade meant that economies started trading more with other countries and there for expanding their market. Multinational Enterprises where the main instigators of Foreign Direct Investment. By trading with other countries they saw they had a demand for their goods and services and rather than operate from their current positions often in the triad countries to open up offices in the emerging markets, where they were overseen by their head offices. ...read more.

As they were, part of the EU citizens of member states could live and work as they pleased. This meant skills of citizens that where no in demand in their own country could travel to other countries where their skills where in demand. This opening up of labour has allowed the world to become more inclusive in terms of the movement of labour. The best example of this is the amount of free labour available in China. China has the largest population in the world. Therefore also has the largest labour force at 768,085,879 people. Basic economics tells us that when the supply is greater than demand its price is very low. Many developed economies have seen this and as a way to increase, their revenues and profits are cutting down labour in their own countries which often have a minimum wage over to countries such as China and India. Clothing group Burberry closed down its factory in Rotherham in 2009 to send the production of their clothing to China (Independent 2009) many other Multinational Enterprises followed suit, this proves the HO model right that China has an amount of labour then is needed to it is able to give it out cheaper. In return, it is able to gain more income into the country and this has led to much more business as companies start to realize the potential markets these emerging economies have. ...read more.

A further more reason to show that even though China and India are amongst the biggest producers of world output they remain the poorest. (World Bank) The above picture shows the projects that are on-going in parts of India to help it get better infrastructure, better sanitation and water supply and make sure the basic needs of its people are met. Globalisation has given us the picture that just because the GDP output of these countries are big that they are automatically wealthy as well. (world bank) The works of organisations such as the World Bank show how the world is still not a fully inclusive economy. Production in China and India is much bigger in comparison to other countries however, the value added by the emerging countries is very little meaning the profits that could be gained are only a fraction. Most of the production is at the manufacturing stage, the manufacturing stage is complete and the products are often shipped back to triad, developed countries, and sold on where the biggest profits are made in the finished goods market. Once the emerging countries are able to produce and have finished goods and have a big enough market to sell these finished goods, they will be able to enjoy the profits that western and triad economies do at present. Once this stage has been reached then the world is able to become a fully inclusive economy. ...read more.