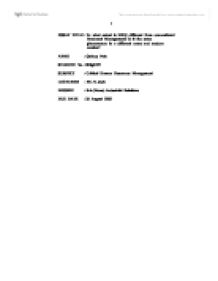 To what extent is HRM different from conventional Personnel Management? Is it the same phenomenon in a different name and modern version?

ESSAY TITLE : To what extent is HRM different from conventional Personnel Management? Is it the same phenomenon in a different name and modern version? NAME : Quincy Pule STUDENT No. : 803p5227 SUBJECT : Critical Human Resources Management LECTURER : Mr. N. Jack DEGREE : B.A.(Hons.)-Industrial Relations DUE DATE : 25 August 2003 INTRODUCTION To capture the theme of my essay, I will first distinguish between HRM and Personnel Management. Thereafter I will provide a general overview of management, interrogate the four dimensions of HRM, ie, inception, development, motivation and maintenance. It is also my intention to delve into the peculiarities of personnel management, which has at some stage grown both as an academic discipline and as a field of application in work organizations. Whether the two disciplines are similar or different, that will be discussed just before the conclusion. DEFINITION OF HRM According to Pieters, M.A. (1996:4), Human Resources Management can be defined as a process consisting of the dimensions of : (i) "inception (getting individuals into the organization) (ii) development (preparing employees to work effectively and efficiently) (iii) motivation (stimulating employees by caring for their needs) (iv) maintenance ( keeping employees in the organization by providing suitable working conditions)". DEFINITION OF PERSONNEL MANAGEMENT Megginson, L.C. (1981:6) defines personnel management as the "performance of all managerial functions involved in planning for, recruiting, selecting, developing, utilizing, rewarding, and maximizing the potential of the human resources of an organization". The implication here is that all managers, at all levels, have a duty to perform the personnel function. A GENERAL OVERVIEW OF MANAGEMENT Bateman, T.S. & Snell, S.A.(1999:6) define management as "the process of working with people and resources to accomplish organizational goals. Good managers do these things both effectively and efficiently. To be effective is to achieve organizational goals. To be efficient is to achieve goals with minimum waste of resources, that is, to make the best possible use of money, time, materials, and people". ...read more.

TRAINING & DEVELOPMENT According to De Cenzo et al (2002:215), "training is a learning experience in that it seeks a relatively permanent change in an individual that will improve the ability to perform the job. We typically say training can involve the changing of skills, knowledge, attitudes, or behaviour. It may mean changing what employees know, how the work, their attitudes towards their work, or their interaction with their co-workers or supervisor". This means that training is used to teach the worker (usually the non-manager) technical knowledge and skills. Apart from new workers, the dynamic environment in which the enterprise operates, necessitates that present workers be kept up to date with the new techniques and equipment in use in the enterprise. On the other hand, employee development is defined by De Cenzo et al (2002:215) as a "future-orientated training, focus on the personal growth of the employee. As your job and career progress, new skills and abilities will be required". In other words, the objective is to develop conceptual thoughts and general knowledge and is usually aimed at managers. According to Pretorius et al (1986:226), here are the objectives of training : (a)Increased productivity : "The worker's latent abilities are utilized. This leads to greater output and greater profits. (b) Quality improvement : Informed workers make fewer mistakes. By applying participative management, the workers' quality also improves. (c) Man-power planning : Training and development helps an enterprise to provide in its future personnel turnover, and when the need arises, internal personnel can be used to fill the vacancy. (d) Increased workers' morale : Workers feel important as a result of the attention paid to them and the fact that they are being developed. This leads to less absenteeism, lower labour turnover and better group co-ordination. (e) Indirect renumeration : Managers see training & development opportunities as part of their remuneration, since the enterprise is financially responsible. ...read more.

This can be attributed to Frederick W. Taylor who had "emphasized the need for proper selection and placement of workers on jobs for which they could become superior producers" (Beach,D.S.,1980:15). According to Pretorius et al (1986:26),Taylor formulated the following four management principles : (i) "The development of a true management science in order to find the best method of performing a task. (ii) Scientific selection and training of workers, in order to allot to each worker and make him responsible for that task which he was most capable of doing. (iii) Mutual co-operation between management and workers which would result in greater profits for both parties. Pretorius et al (1986:26) continues to point out that due to his management principles, Taylor's efforts involved increased productivity by using fewer workers but who worked more efficiently as a result of improved management and working methods. The worker himself could earn more money. DIFFERENCES BETWEEN P.M. AND HRM. According to Beardwell, I. & Holden, L.(1997:21), these are the differences : HRM goes beyond contract and is not rule bound. Workers should be nurtured. HRM has adopted a unitarist approach, hence conflict is de-emphasized. The role of management focuses more on transformational leadership and communication is direct. It seeks to achieve competitive advantage through the strategic deployment of a highly committed and capable workforce, using an integrated array of cultural, structural and personnel techniques. Pay is performance-related. HRM follows a descriptive model, salaries are non-negotiable. PERSONNEL MANAGEMENT It is rule-bound and pluralist, and there is no flexibility. Conflict is institutionalized and communication is indirect. PM realizes that you can treat people like other material objects in the workplace. It is a reaction to possible challenges from the workers. It follows a critical evaluative model which is radical perspective. CONCLUSION One can conclude that the two styles of management have one principle in common, ie, that a workplace should be managed in order for the organization to achieve its goals. HRM is an improvement on Personnel Management in that employees are now regarded as an important asset of the organization. ...read more.