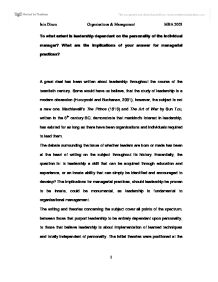 To what extent is leadership dependant on the personality of the individual manager? What are the implications of your answer for managerial practices?

To what extent is leadership dependant on the personality of the individual manager? What are the implications of your answer for managerial practices? A great deal has been written about leadership throughout the course of the twentieth century. Some would have us believe, that the study of leadership is a modern obsession (Huczynski and Buchanan, 2001), however, the subject is not a new one. Machiavelli's The Prince (1513) and The Art of War by Sun Tzu, written in the 6th century BC, demonstrate that mankind's interest in leadership, has existed for as long as there have been organisations and individuals required to lead them. The debate surrounding the issue of whether leaders are born or made has been at the heart of writing on the subject throughout its history. Essentially, the question is: Is leadership a skill that can be acquired through education and experience, or an innate ability that can simply be identified and encouraged to develop? The implications for managerial practices, should leadership be proven to be innate, could be monumental, as leadership is fundamental to organisational management. The writing and theories concerning the subject cover all points of the spectrum, between those that purport leadership to be entirely dependant upon personality, to those that believe leadership is about implementation of learned techniques and totally independent of personality. The initial theories were positioned at the opposing extremes, although they have evolved to acknowledge that leadership is a combination, of both personality and technique. Leadership as an innate ability The first school of thought to emerge in the early 1900's was that of Trait Spotting, which argues leadership is wholly innate. The basis for Trait Spotting is Great Man Theory, the concept that throughout history great leaders have arisen to guide organisations to success, or, away from disaster. It suggests that when selecting future leaders, organisations should look for certain character traits associated with leadership ability. There are a number of alternative lists of essential traits, compiled through observation of successful leaders. ...read more.

Quoted in Peters and Waterman, Burns describes the principle of the style: Leaders and followers raise one another to higher levels of motivation... (Burns, 1978, cited by Peters and Waterman, 1982 p. 83) The newer styles of leadership represent a broadening of the scope of traditional style theory from the initial standpoint, that leadership has no connection with personality, to one that acknowledges both technique and personality. This corresponds with the moves by Goleman (1998) and others to shift trait theory in the opposite direction. Despite the improvements the new theories still perform inconsistently when applied to the real world. Transformational leadership for example, relies upon the ability of the leader to instil common goals amongst their followers, in line with those of the organisation. However, no matter how enthusiastic or charismatic the leader, it may simply prove impossible to achieve this. Although the new theories do not provide the answers themselves, they may have uncovered an important new aspect to the leadership debate. Their increased focus upon the role of the follower, has led some to realise, that in addition to the roles played by the personality and technique of the leader, the corresponding attributes of their followers may prove as, if not more, important, in determining their leadership's success. Leadership through followers Many have offered their definition of a leader or leadership, Handy suggests: Someone who is able to develop and communicate a vision which gives meaning to the work of others. (Handy, 1993 p. 117) Whereas Kotter (2001) says leaders are simply individuals who guide organisations through periods of change. As yet a succinct definition of leadership has not been generally agreed. Perhaps it is unsurprising then that there is little agreement about other aspects of the subject. In fact all that is widely agreed upon is that to be a leader an individual must possess one thing, followers. Initially, this appears to be a statement of the obvious, well it is, but this seemingly insignificant piece of information may hold the key. ...read more.

The combination of personality and technique will depend upon the individual. Some will be primarily noted for their personality, others for their technique. It is important to remember the role of the follower as, whilst leadership ability may be dependant upon personality and technique, the ability to lead is in the hands of those that follow (Brown, 2003). Leaders should therefore be able to adapt, both their technique and themselves to the expectations of their followers. Furthermore, neither personality, nor knowledge and experience, can be considered discreet variables. Personality is rarely left unaffected by experience gained or knowledge obtained. Less obvious, but equally true, is the concept that all we experience and all that we learn is filtered by our personality. How often do two individuals' memories of a shared experience differ significantly? This is due to their personality, inclining them to place differing emphasis upon each piece of information to which they are exposed. In summary, all that can be said with certainty is that leadership generally, is neither completely dependent nor independent of personality. However, the extent of the influence of personality upon leadership, in the case of the individual, is, dependent upon the manager. The implications of this answer do not directly affect upon any managerial practice only the method by which they are chosen. To this extent is it imperative that the view of followers be taken into account, as it is they who hold the key to any leader's success. Comment Attention should also be paid to the direction in which a leader is taking those who follow. History has shown that some of the most successful leaders have led their organisations into disastrous situations. Adolf Hitler's leadership ability enabled him to lead the German people into committing acts of the most insane cruelty and ultimately to the bitterest of defeats. Paling into insignificance by comparison, the recent situations at companies like Enron, WorldCom and Marconi have demonstrated that the dangers of unquestioned leadership remain just as relevant today as they were in Machiavelli or Sun Tzu's day. Perhaps this is another job for followership. ...read more.