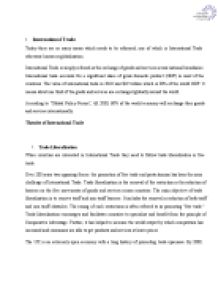 Trade Liberalisation and Poverty - the examples of Britain, Vietnam and Nepal.

To make engagement directly in external trade, it was made allowed to the private companies in 1990-1991. There was a rule while licensing for enterprise to be involved in trade and later, it was in progress in a decade. After some years, ministry of trade eliminated the licensing process. We all know that Vietnam is continuously working in encouraging ever since the making of open door policy in 1987. Approval of foreign direct investment was under control by the ministry of planning and investment. There was a diverse in entering number of trading arrangements during the 1990s. In 1992 treaties agreement were done with strong economies with European Union and it increases the quotas of Vietnamese textiles and clothing in the European market. After the increase of export goods in European market later it joined with different types of association to develop the free trade to different countries. The doi moi policy set in 1986 made reforms that made the impoverished, isolated, stagnant nation gradually through 1990?s into a vibrant, market driven capitalist nation. Much economic deregulation was set forward with the government playing decisive role. There was a boom in enterprise and trade which was also part due to the informal and shadow sector of family and peasant run through currency trading and smuggling existing before the policy was set. The trade was expanded from CMEA (The Council of Mutual Economic Assistance) to trade pacts with western and other south East Asian countries. The per capita income increased through many folds. The shocks international trade was transferred via many channels. 1. Channels of Transmission: Price, Employment & Wages Channel & Fiscal Channel The country?s real GDP grew with a 7-8 % annum growth in between 1990-2005. This can be taken as a clear indication in growth of household income. A clear relevance of trade can be seen with trade when export per capita is compared. ...read more.

1. Meaning of Inequality In simple terms inequality refers the gap between the rich and poor or the quality of being unequal. For example : Lack of uniformity, unevenness, disproportion, diversity, disparity, inequality in size, power distance, numbers, property, ranks etc. 1. Impact of Trade Liberalization on Inequality As we know that Trade liberalization means to decrease or reduce in trade barriers. Exporting from home country to host country i.e. second country found to be associated with lower inequality. For developed country import from developing countries are effects in reduction on inequality where as export from developed countries to developing countries effect in increase on inequality. For developing countries like china, India and others agricultural exports can decline inequality. Agriculture employment increases inequality whereas industry employments reduce it. 1. Impact of Financial Liberalization on inequality It is noticed that the impact on financial openness mainly felt through FDI. Financial liberalization means reduce in barriers between financial institution and financial marketplace. FDI is the key element associated with increase or decrease on inequality. Inward FDI is linked with rising inequality whereas outward FDI is linked with reducing inequality. Within past two decade financial liberalization is increasing in very rapid pace. Financial Liberalization may reduce income inequality by increasing access to capital for the poor people. 1. Impact of Technological Advancement on Inequality Every new gadget is more advanced as compared to previous one. Technology consist not only the computer or the cell phones but also covers the all aspects of human life. The impact of Technology is also closely related through FDI. IT progress enlarges returns on human capital, underscoring the importance of education and training in both developed and developing countries in addressing rising inequality. It has favored higher skilled worker than lower skills ones. Higher access to education has reduced inequality in developing countries by allowing population to engage in high skill activities. Technology advancement is the premium on higher skills, rather than limiting opportunities for economic advancement Thus, Technological progress increases the relative demand for higher skills, exacerbating inequality. ...read more.