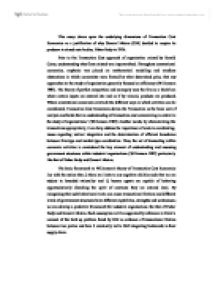 This essay draws upon the underlying dimensions of Transaction Cost Economics as a justification of why General Motors (GM) decided to acquire its producer in closed auto-bodies, Fisher Body in 1926. Prior to the Transaction Cost approach of organisation coined by Ronald Coase, understanding why firms existed was impoverished. Throughout conventional economics, emphasis was placed on mathematical modelling and mindless abstractions in which economists were fixated by what determined price, that any approaches to the study of organisation generally focused on efficiency (Williamson 1981). The theory of perfect competition and monopoly sees the firm as a black box where certain inputs are entered into and as if by miracle, products are produced. Where conventional economics overlook the different ways in which activities can be coordinated, Transaction Cost Economics deems the 'transaction as the basic unit of analysis and holds that an understanding of transaction cost economizing is central to the study of organisations.' (Williamson 1981) Another words, by characterizing the transactions appropriately, it can help address the importance of costs in coordinating, issues regarding vertical integration and the determination of efficient boundaries between firm-type and market-type coordination. ...read more.

According to Williamson this was logical because where the 'three critical dimensions of transactions' (Masten 1996: 390) namely: frequency, degree of uncertainty, and asset specificity was present, the most efficient government structure emerged, this being vertical integration. Where GM integrated backwards in their supply chain in order to internalise transactions within one organisational structure, markets and hierarchies represent alternative government structures. If General Motor's assets were non-specific, then they could have purchased its assets through a normal market relationship based on relevant prices. But as we can see with such market structure, it poses the possibility for agents to act opportunistically. With GM and Fisher Body, we see the emergence of a vertically integrated firm as an efficient response to the transaction cost associated with market-type coordination. Therefore, by adopting Transaction Cost Economics as a way of analysing organisations we can predict that vertical integration hierarchies will take place within an industry, like that of Fisher Body and General Motors, through the present of these three distinct dimensions1: i) the frequency of a transaction, ii) the uncertainty surrounding the transaction and iii) the level of asset specificity associated with the transaction. ...read more.

As a result, 'it was the threatened expiration of these provisions, not holdup, that was the primary source of contractual difficulty between GM and Fisher.' (Freeland 2000: 44) Along with these limitations as stated by opposing economists such as Coase and Freeland, further dispute was made to the validation of a hold-up in the Fisher body-GM case study. These include accounts of how Fisher Body's decision to move its plants away from GM was in fact not true (Freeland 2000), and it was also stated by Coase (2006: 265) that Fred Fisher, one of the Fisher brothers, became a director of GM in 1922 thus, making it inconvincible that Fisher Body adopted an inefficient production process. But what is important to note is not the number of arguments presented by either opposition, rather Transaction Cost Economics provides one of the many theories associating with industrial organisation. The classical example of Fisher Body and GM is one that illustrates the potential and explanatory power of the Transaction Cost Economics framework. Whether or not such theory purely describe firm behaviours, 'TCE, with efficiency analysis at its core, has an important place in the multiparadigm world of organization theory, but to claim that it is the only paradigm would be foolhardy. ...read more.