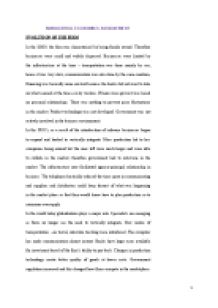 Transaction cost economics (TCE) is similar to game theory where all the parties to the contract is assumed to understand the strategic situation and will position themselves accordingly;

﻿MANAGERIAL ECONOMICS ASSIGNEMENT EVOLUTION OF THE FIRM In the 1840?s the firm was characterised by being family owned. Therefore businesses were small and widely dispersed. Businesses were limited by the infrastructure at the time ? transportation was done mainly by sea; hence it was very slow, communication was also done by the same medium, financing was basically none existent because the banks did not want to take on what seemed at the time a risky venture. If loans were given it was based on personal relationships. There was nothing to prevent price fluctuations in the market. Product technology was not developed. Government was not actively involved in the business environment. In the 1910?s, as a result of the introduction of railways businesses began to expand and looked to vertically integrate. Mass production led to less companies being around but the ones left were much larger and were able to collude in the market; therefore government had to intervene in the market. The infrastructure now facilitated agency-principal relationship in business. The telephone drastically reduced the time spent in communicating and suppliers and distributers could keep abreast of what was happening in the market place so that they would know how to plan production so to minimize oversupply. ...read more.

This concept relies on the fact that decision makers have to work under three unavoidable constraints which are: only limited, often unreliable information is available regarding possible alternatives and their consequences, human mind has only limited capacity to evaluate and process the information that is available and finally, only a limited amount of time is available to make a decision. Opportunism: ?opportunism is a necessary condition for the creation of transaction costs? (Maria Moschandreas, 1997). Opportunism is considered as an endogenous factor in TCE. It forms an inherent part of business relationships. According to Williamson, opportunism is one of the "rudimentary attributes of human nature". Whenever individuals will be given the chance to act opportunistically, they will do so. Behavioral uncertainty: Uncertainty is a situation where the current state of knowledge is such that the order or natures of things are unknown. Although too much uncertainty is undesirable, manageable uncertainty provides the freedom to make creative decisions. Behavioral uncertainty is the uncertainty that may be present in a transaction due to the opportunistic inclinations of the transacting parties (John & Weitz, 1988). Behavioral uncertainty thus results from the possibility for the ?strategic nondisclosure, disguise or distortion of information? by the transacting parties (Williamson, 1985), and thus concerns the chance that a contracting party may behave opportunistically, and thereby harm the other contracting party. ...read more.

On this basis, ?l?Association du Maroc competitive? have introduced vertical integration in the Moroccan agro-food industry. Canned olives sector is then divided into three segments which are: field production, manufacturing and commercialization. By combining these three segments, the farmer, the firm and the wholesaler became, henceforth, a unique unit. In fact, Specialist suppliers can achieve a size and degree of specialisation that enables them to conduct activities more effectively and efficiently than when they are conducted inhouse. Information technology and human resource management represent two activity areas where inhouse providers can experience difficulty competing with specialist suppliers (Domberger, 1998, Kakabadse and Kakabadse 2000). Farmer as specialist supplier of raw olives and the wholesaler as specialist supplier of information and clients needs contribute to the economies of scale. The objective of this integration is to dissolute information waste and lack of control over quality in the streamline of production chain. Then, in the upstream level, firms control the quality of raw olives by owning their own olives field or by contracting a sever contracts with farmers. In the other hand, firms produce in response to the specifications expressed in terms of costumer?s needs and preferences. Quality and quantity are, then, two correlated criterions which condition the production process. The unique unit manages and adapts then its production in terms of quality and quantity according to the market movement. ...read more.