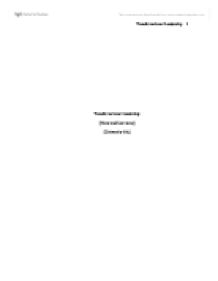 Transformational Leadership [Name and Last name] [University title] Table of Contents 1. Introduction 2. Theoretical Approaches to the Study of Leadership a. Transformational versus Transactional Leadership b. Leadership Styles c. Contemporary Approaches to Understanding of Leadership 3. Conclusion There are three main approaches the study of leadership: theory of personality traits, behavioral approach and situational approach. Since 1920, the followers of the theory of personal qualities were trying to find out what characteristics of a person to provide leadership. Developing this idea, researchers believed that if these "special" qualities were to be identified, people could learn to "educate" a leader. The theory is based on the features of the German psychologist late XIX - early XX century and focuses on the innate qualities of leadership. In the framework of the features, the concept of transformational and charismatic leadership has been developed (Storey, 2004). Transformational leadership is the process of achieving significant changes in attitudes and representations of members of the organization and the formation of the commitment of significant changes in the goals and strategies of the organization (Anagnoste et. al., 2010). Transformational leadership involves the provision of leader influence on subordinates, but the effect of this influence is the empowerment of subordinates, who are also leaders in the transformation of the organization. With charismatic leadership, the focus is on individual leaders. On contrary, charismatic leadership is built on energy, charm, his ability to inspire, lead. Although most researchers agree that charisma is a special gift and one can't learn, there are some aspects of charismatic leadership, which everyone can apply in practice (Anagnoste et. ...read more.

For example, among the motivations of leadership called the desire for power, which compensates for feelings of inferiority [A. Adler], the desire to control the situation, offsetting anxiety associated with a frustrated need for security [K. Horney] (Avolio, 2002). All of the above theories of leadership consider leadership as an internal phenomenon, associated with the characteristics of the leader - whether innate or acquired. In addition to these endogenous theories, there are other concepts that - let's call them, respectively, exogenous theories - in which leadership is viewed solely as a result of the influence of external, social (rather than personal) factors (Middlehurst, 2008). One of them is the theory of leadership as a function of the group. The founder of this theory J. Homans believed that every social group - a group of slaves in need of leaders and leadership he defines as a person that best reflects the group values that can satisfy the needs and expectations of the group (Middlehurst, 2008). The next step in the understanding of leadership is the theory of situational leadership. The founder of this theory R. Stogdill believed that a person becomes a leader not because of their special characteristics and needs of the group, but because of the situation (Middlehurst, 2008). Experimentally he found that one and the same person in the same group becomes the leader in one situation and not become another. Some authors try to combine the external factors (environmental factors, the factor of the situation, etc. ...read more.

The partial approach is formed by the practice of psychologists and suggests ways of correcting the personal orientation in the environment. Formation of manager's personality indirectly associated with working off some operations and included in management activities, from psycho-correction system of relationships. Special attention is given to the development of thinking and the creation of algorithms for solving management problems (Eader, 2008). Engineering-psychological approach considers the head as the decision maker (Eader, 2008). This approach limited the study of psychological processes of the head of information and its individual characteristics, manifested in management. Reflexive-value approach examines personality of the head through the formation of his reflexive-value-management concepts (Eader, 2008). The ability to head the integration is manifested in the formation, reflection and self-correction of its own management concept which consists of a series of overlapping conceptual models of activity. Its elements are: strategic plans, economic performance, problems encountered in implementing the targets, the causes of problems; management tools address the causes, functional units that implement these tools, information on the state of activity. In the socio-psychological approach, developed and empirically proven different models of personality manager industrial organization, studied the effect of manager's personality on the effectiveness of management, organizational capacity and focus of leadership, forecasting professional development, management and interaction effects of social and perceptual processes in government; role conflict and socio-psychological orientation (Eader, 2008). Situation-integrated approach considers the dynamics of personality development manager in different management situations and life events (Eader, 2008). To study the mechanisms of personality development manager highlighted the complex (evaluation activities throughout the volume of its functions) and local (bound for a function) prediction and expressive evaluation. ...read more.