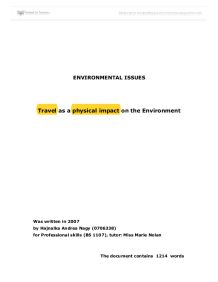 Travel as a physical impact on the Environment

ENVIRONMENTAL ISSUES Travel as a physical impact on the Environment Was written in 2007 by Hajnalka Andrea Nagy (0706338) for Professional skills (BS 1107), tutor: Miss Marie Nolan The document contains 1214 words Executive summary In this report the importance of environmental issues is highlighted in relation with the travel and transport industry. There are some external factors that influence the travel industry and it is explained how they affect the environment. It is also highlighted that being environmentally conscious will be more beneficial for businesses on a long term basis. The aim of this report is to help decision makers in the travel and transport industry in their further decisions balancing appropriately between giving priority to environmental issues and making bigger profits over spoiling the environment. The report contains gathered data of different kinds of sources from government reports, market intelligence such as Mintel and Keynote reports, to BBC publications and national statistics. On-line articles like The Independent, The Guardian, The Observer and Financial Times provided additional information for being up to date. The key findings of this report are that although there are some negative environmental effects - by the usage of old vehicles and the increasing number of flights - that the travel and transport industry inflicts; on the other hand there are several encouraging signs like new government policies, intervening taxes and technological advances. The overall tendency is that people are more and more environmentally conscious, therefore technologies not aware of their effects on the environment will be rejected or boycotted. ...read more.

2.3 Technological developments i, Improved cars There are 24 million car on our roads.(Camden Council 2007) But surprisingly this amount doesn't pollute the environment more as third as much cars did decades ago. Improved vehicle engineering can have a significant and constant impact on preserving our environment. New cars can emit as little as 15% of their predecessors emission was fifteen years ago. ii, Bigger planes As the Internet enabled the operating of real-time, dynamically pricing booking systems, it is now possible to reduce dramatically the empty seats an aircraft flying with. That is lowering substantially the CO2 emission per passenger. It is also positive that newly constructed air planes are designed to carry more passengers - up to 840 in an Airbus 380 - (BBC News 2005) with much more efficient engines than before. Environmentally conscious people are likely to consider these factors when choosing an airline. iii, Fast train services Train services became recently real alternatives, therefore competitors of airline services as they are safer and in some cases much faster, like the Paris-London and Paris-Brussels routes.(Charles Batchelor 2007) Using electricity for travel that was produced from renewable sources is the ultimate goal, what nowadays' train services made the first step towards.(BBC News 12/2007) iv, Internet Business meetings are more often held without the need of travel through video links on the Internet. As technology becomes widespread, demand for business travel will fall significantly, as people will choose the on-line alternatives as they are less time consuming, much cheaper and almost equally effective.(Keynote 2007) ...read more.

This essay covers some of the key ideas and issues which relate to the environmental impact of transport and travel. However, it could be improved by taking a more critical view of the information it uses. At times it is fairly simplistic and does not go into the detail which could be expected at this level. The scope of the answer is also not made clear - which aspects of "transport and travel" are included and which aren't?