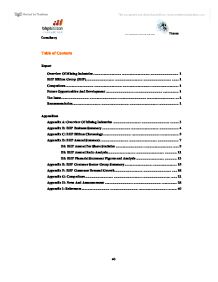 Table of Contents Report Overview Of Mining Industries 1 BHP Billiton Group (BHP) 1 Competitors 1 Future Opportunities And Development 1 Tax Issue 2 Recommendation 2 Appendices Appendix A: Overview Of Mining Industries 3 Appendix B: BHP Business Summary 4 Appendix C: BHP Billiton Chronology 5 Appendix D: BHP Annual Summary 7 D1: BHP Annual Per Share Statistics 9 D2: BHP Annual Ratio Analysis 11 D3: BHP Financial Statement Figures and Analysis 13 Appendix E: BHP Customer Sector Group Summary 15 Appendix F: BHP Consumer Demand Growth 18 Appendix G: Competitors 22 Appendix H: News And Announcement 28 Appendix I: References 40 Overview of Mining Industries The worlds' mining industry revived, along with the escalating demands for resources in growing economies countries such as China, Brazil and India. Following the 2008 financial crisis; which affected the worlds' economy and many companies suffered losses during that period, China and India had begun to replenish their depleting supplies. As a result, there is a significant rebound in commodity prices from the record low financial crisis and spot prices of iron ore, copper and coking coal, which have increased in more than expected. In order to keep up with the worlds' future demands for resource materials, an average growth of 6.8 percent is probable five years down the road. Australia is regarded as the world's third largest producer of commodities hence they are nearly self sufficient in most commodities. The positive export demand and investments from China, other parts of Asia and the rest of Europe are the few reasons in which Australia's' economy picked up since 2008 financial crisis, particularly in the mining industries. The mining industry has been a major contributor to the economic growth, and over 7 percent of GDP in Australia serves as an important impetus to the country. As a result, the industry is expected to generate massive revenue of about 19 percent of Australia's GDP, and make up approximately 60 percent of Australia's export earnings. ...read more.