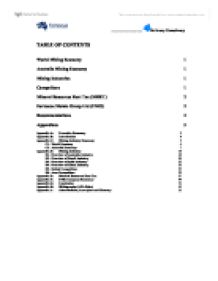 TABLE OF CONTENTS World Mining Economy 1 Australia Mining Economy 1 Mining Industries 1 Competitors 1 Mineral Resources Rent Tax (MRRT) 2 Fortescue Metals Group Ltd (FMG) 2 Recommendations 2 Appendices 3 Appendix A: Executive Summary 3 Appendix B: Introduction 4 Appendix C: Mining Industry Economy 5 C1. World Economy 5 C2. Australia Economy 7 Appendix D: Mining Industry 16 D1. Overview of Australia Industry 16 D2. Overview of Brazil Industry 20 D3. Overview of India Industry 22 D4. Overview of China Industry 23 D5. Global Competitors 25 D6. Area Competitors 29 Appendix E: Mineral Resources Rent Tax 37 Appendix F: FMG Company Summary 39 Appendix G: Conclusion 51 Appendix H: Bibliography (APA Style) 52 Appendix I: Abbreviations, Acronyms and Glossary 55 World Mining Economy The world's mining industry is recovering quickly after the 2008 global financial crisis as there is high demand for resources in growing economies like China and India. There is significant rebound in commodity prices and corporations experienced major recovery in 2009 after big losses in 2008. There will be growth on an average of 6.8 percent over the coming five years despite that large investments into mining companies have been postponed ever since the financial crisis and have yet to pick up, as they will have to cope to keep up with global future demands. Australia Mining Economy The Australian economy fared rather well especially in mining sector due to optimistic export demand and investment from China, and the strong health of Australia's banking sector. Mining sector plays an important role in generating tax revenues, export earnings and FDI. It has also been a major contributor to Australia's GDP, its economy, infrastructure and is regarded as the major earner in terms of export of products. Australia's growing economic link to major economies, especially with China and India has been one of the main reasons which provide confidence in the country's future growth amongst investors. The future of its economy and mining economy are projected to be very positive. ...read more.

(Debarati Roy) Iron ore exports to China slow down (News Article 4) Indian iron ore exports to China have turned sluggish as manufacturing slows down in that country due to the weakening demand from the crisis-hit Europe. This, in turn, has affected the spot iron ore prices that have declined by almost a fourth in the past one month. Exporters said that the Chinese steel mills have sufficient inventory and that stocks have piled up at major ports, resulting in sluggish iron ore imports from India. Exports could be down by 20-25 per cent, they estimate. "Exports are down considerably," said Mr Ranjan Chibba, Vice-President, Red Horse Resources (Hong Kong) Ltd, a company that trades in iron-ore. Mr Chibba attributed the inventory pile up at Chinese steel mills to the slowing sales to the crisis-hit Europe. Mr R.K. Sharma, Secretary-General, the Federation of Indian Mineral Industries (FIMI), said that Chinese mills have stockpiled iron ore that would last for about two months. The Chinese have produced about 25-30 per cent more steel in the past quarter and unless that is consumed or sold, the demand for Indian ore is unlikely to pick up, Mr Sharma said. Reduced demand from China, the main importer of the Indian iron ore, has impacted the spot prices that have fallen from about $185 a tonne to around $140 a tonne in the past one month, Mr Sharma said. However, Mr Chibba also attributed the decline in prices to the impending quarterly pricing mechanism that large exporters such as Vale and BHP Billiton plan to adopt. Stating that ore exports from Goa for April-May stood at 10-12 mt, Mr Glen Kalavampara, Secretary, Goa Mineral Ore Exporters' Association (GMOEA), said exports were slowing as mining activity comes to a halt due to the onset of monsoons. Commenting on the Chinese ban on import of iron ore fines from India, Mr Kalavampara said: "It is mere speculation by media. ...read more.