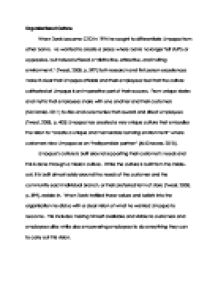 Organizational Culture When Davis became CEO in 1994 he sought to differentiate Umpqua from other banks. He wanted to create a place where banks no longer felt stuffy or oppressive, but instead offered a "distinctive, attractive, and inviting environment." (Tweel, 2008, p. 397) Both research and first person experiences make it clear that Umpqua officials and their employees feel that the culture cultivated at Umpqua is an imperative part of their success. From unique stories and myths that employees share with one another and their customers (McDaniel, 2011) to rites and ceremonies that reward and direct employees (Tweel, 2008, p. 403) Umpqua has created a very unique culture that embodies the vision to "create a unique and memorable banking environment" where customers view Umpqua as an "indispensible partner" (Al-Ghawas, 2010). Umpqua's culture is built around supporting their customer's needs and this is done through a mission culture. While the culture is built from the inside-out, it is built almost solely around the needs of the customer and the community each individual branch, or their preferred term of store (Tweel, 2008, p. 399), resides in. When Davis instilled these values and beliefs into the organization he did so with a clear vision of what he wanted Umpqua to become. This includes making himself available and visible to customers and employees alike while also empowering employees to do everything they can to carry out this vision. ...read more.

Communication is imperative amongst employees and even Davis visits stores to personally encourage employees and give them feedback. Recognition is also important and each year Umpqua holds the "Umpqua Oscars" and the "Celebration of Excellence". The Celebration of Excellence focuses solely on the efforts of those in the front lines. (Tweel, 2008, p. 403) Innovation and Change Davis felt that in order for Umpqua to stand above other banks, much less survive, the brand must be differentiated from every other bank on the market. He didn't want Umpqua to follow standard procedure and simply end up trying to coax potential customers into opening accounts and using their services based solely on typical banking standards such as location and rates. Instead, Davis took a look at those businesses outside of the banking arena that were successful, almost to the point of a cult following, and considered what he could take away from businesses like Starbucks, Nordstrom, and Ritz-Carlton Hotels (Tweel, 2008, p. 399). This resulted in his decision to run Umpqua banks like retail stores. This change was a huge departure from what consumers have come to expect when they step into a bank. Building an inviting retail atmosphere that simply encourages customers to stop by and hang out may seem a bit strange to customers, and even new employees, at first, but managers like McDaniel do see customers taking advantage of the services offered at Umpqua that aren't necessarily banking related (McDaniel, 2011). ...read more.

While this type of information doesn't seem to be force-fed to visitors and customers, it is evident throughout any store location and on their website. Just like with any bank there are brochures offering information and associates waiting to help you with any questions you might have. Add to that financial literacy classes and other ways of educating the public and it's quite possible that Umpqua may turn visitors into customers. However, there are two factors that may derail Umpqua's efforts to gain customers. First, community residents may find it odd to go hang out at a bank no matter what activities are offered therein. Those who lack internet at home or are looking for a quick, free Wi-Fi hook-up may more naturally head for the city library than seek out an Umpqua store. Second, changing banks isn't something most consumers consider easy and thus do so very seldom. According to J.D. Power and Associates most banking customers change banks only when life circumstances, such as a move, dictate that they must. However, they also note that with the state of the economy, loyalty to banks is eroding and customers are more willing to change banks if they feel the bank offers greater levels of stability and improved levels of service. (Ranii, 2011) If Umpqua can in fact fill their lobby with potential customers taking advantage of their non-banking services and convince these visitors that their bank is a stable and integral part of the community and make changing banks simple, they may in fact manage to significantly improve their numbers. ...read more.