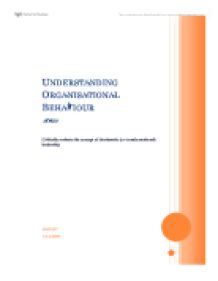 UNDERSTANDING ORGANISATIONAL BEHAVIOUR IB1230 INTRODUCTION "I care more about being a leader than being liked, especially when I see someone with ability who isn't trying his hardest." Michael Jordan Defining Charisma Charisma is difficult to define. We may do so however through the use of some quotes and resources that seek to define and explain charisma. Charisma is a rare personal quality attributed to leaders who arouse fervent popular devotion and enthusiasm. Defined as a rare trait found in certain human personalities usually including extreme charm and a "magnetic" quality of personality and appearance along with innate and powerfully sophisticated personal communicability and persuasiveness, charisma is used to describe an uncanny ability to charm and influence people. It refers especially to a quality in certain people who easily draw the attention and admiration (or even hatred if the charisma is negative) of others due to a "magnetic" quality of personality and/or appearance. Despite the strong emotions they so often induce in others, charismatic individuals generally project unusual calmness, confidence, assertiveness, dominance, authenticity, and focus, and almost always possess superb communication and oratorical skills. CHARISMATIC LEADERSHIP; THE GOOD AND THE BAD Many groups, religious, business, social, and political are interested in charismatic leadership. Many such groups have charismatic leaders at their helms. ...read more.

"Build bridges between people, especially in times of crisis." Herb Kelleher HAS THIS LEADER CHANGED THE ORGANIZATION FROM A FAILURE TO A SUCCESS? Herb Kelleher transformed a small, regional Texas airline into a hugely successful, leading, national airline. "In a rollicking session, Kelleher displayed the passion, irreverence, and can-do attitude that have characterized the rise of Southwest from long shot to long-term success in a business that's notorious for its financial turmoil. The airline has grown from serving three cities and with three Boeing 737s in 1971 to 35,000 employees and 375 Boeing 737s that cater to 63 million customers at 59 airports in 30 states as of the end of 2002." "The Southwest story is now a business legend: how the airline began in 1966 with 195 employees and three planes that flew from Dallas's Love Field to Houston and San Antonio; how Kelleher and cofounder Rollin King drew up the business plan on a cocktail napkin; how its profit-sharing plan has made many longtime employees millionaires; how the company has grown to 29,000 employees with a fleet of 332 Boeing 737 planes (290 more are on order) and become a national carrier competing with United, American, and Delta." HAVE THEY WISELY AND ETHICALLY USED CHARISMA THAT CAN ACTUALLY LIFT AN ENTIRE ORGANIZATION'S PERFORMANCE? ...read more.

(1987). The determination of positive and negative charismatic leadership, Grantham: PA: Messiah College Conger, J. A., and R. N. Kanungo (Eds), Charismatic Leadership in Organizations. Thousand Oaks, CA: Sage Publications, 1998 The ethics of charismatic leadership by Jane M. Howell and Bruce J. Avolio, Academy of Management Executives, 1992, Vol. 6 No.2 Neff, Thomas J. and Citrin, James M. Lessons from the Top: The 50 Most Successful Business Leaders in America--and What You Can Learn From Them?, New York, NY: Doubleday, 1999 Cohan, Peter S. Value Leadership. San Francisco: Jossey-Bass. 2003. (This books mentions Southwest Airlines as an example of ethical hiring and the impact such value-based employment has on the corporation in general.) Gittell, Jody. The Southwest Airlines Way: Using the Power of Relationships to Achieve High Performance. McGraw-Hill Trade. December 19, 2002. (Southwest Airlines' success is said to be rooted in relationships based upon shared knowledge, goals, and respect among all employees.) Harris Ph.D., Jim. Getting Employees to Fall in Love with Your Company. New York: AMACON, 1996. (Herb Kelleher is mentioned as an example of a charismatic leader that promotes employee loyalty and company success.) Brooker, Katrina. "Can Anyone Replace Herb?" FORTUNE. April 17, 2000. (Available at http://money.cnn.com/magazines/fortune/fortune_archive/2000/04/17/278112/index.htm) Kelleher, Herb. "A Culture of Commitment." Leader to Leader. No.4, Spring 1997. (Available at http://www.pfdf.org/leaderbooks/l2l/spring97/kelleher.html) There are many more books and newspaper and magazine articles listed on the Southwest Airlines website: http://southwest. ...read more.