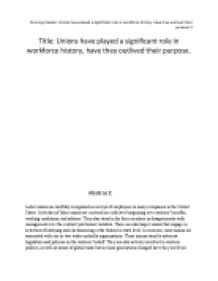 Unions have played a significant role in workforce history, have they outlived their purpose in the USA?

﻿Title: Unions have played a significant role in workforce history, have they outlived their purpose. Abstract: Labor unions are lawfully recognized as envoys of employees in many companies in the United States. Activities of labor unions are centered on collective bargaining over workers? benefits, working conditions, and salaries. They also stand in for their members in disagreements with management over the contract provisions violation. There are also larger unions that engage in activities of lobbying and electioneering at the federal or state level. In America, most unions are associated with one or two wider umbrella organizations. These unions stand to advocate legislation and policies on the workers? behalf. They are also actively involved in workers politics, as well as issues of global trade but as times generations changed have they out lived their purpose. This paper examines labor unions, labor laws, NLRB and, the different generations represented in the workforce and how they affect the future of the Union. HISTORY Labor unions have existed in one form or another in the United States since the birth of the country. They were created in an effort to protect the working population from abuses such as sweatshops and unsafe working conditions. On the other hand, they have also been accused of crippling industries and consorting with organized crime over the decades. But in one way or another, labor unions have been woven into the political, economic and cultural fabric of America, and their influence has played a colorful role in its development. The first hundred years of U.S. history saw relatively little in the development of labor unions. A few were organized in scattered fashion, but many of those simply disbanded after they had achieved their goals, such as when the printers briefly unionized in New York City in 1778. The first successful strike in building trades took place in 1791 when Philadelphia carpenters campaigned for a ten-hour workday. ...read more.

The General Counsel acts as a prosecutor and the Board acts as an appellate judicial body from decisions of administrative law judgements. The labor movement in the United States grew out of the need to protect the common interest of workers. For those in the industrial sector, organized labor unions fought for better wages, reasonable hours and safer working conditions. The labor movement led efforts to stop child labor, give health benefits and provide aid to workers who were injured or retired. The ideas they introduced, such as protection for workers, became part of our American culture and an early need for survival. Prior to 1935, American workers had the right to become trade union members and to withhold their labor during industrial disputes, but employers also had the right to fire workers because they had enrolled in unions or had taken part in strikes. During economic hard times it was more difficult for an employee to find other work than it was for an employer to hire another employee. Thus, workers were hesitant to join trade unions, and by 1933 just 10 percent of America's workforce was unionized. In 1933, Senator Robert F. Wagner (NY-D) submitted a bill before Congress that would help prohibit unfair labor practices by employers. With the backing of Secretary of Labor Frances Perkins, Wagner's measure became the National Labor Relations Act (NRLA), informally known as the Wagner Act. It had been called the law that most affected the relationship between the federal government and private enterprise. Then, in the summer of 1935, during a period of dramatic reform initiatives that came to be called the Second Hundred Days, Roosevelt suddenly announced his support for the Wagner-Connery Labor Relations Act. Despite conservative opposition, the bill passed both houses easily and was signed on July 5, 1935. Congress enacted the NLRA on July 5, 1935. Before the law, employers had freedom to spy upon, question, punish, blacklist, and fire union members. ...read more.

The downward trend in private sector union density shows no sign of abating, much less of turning around. Unions have failed to get the Congress to enact labor law reforms that would make organizing easier. Union leaders have put organizing at the top of the union agenda, but without any notable organizing successes. Public sector unions face attacks on collective bargaining amidst fiscal austerity that threatens their ability to function. But workplaces invariably create collective interests, and collective interests invariably produce collective actions. In years past unions have arisen from the grave, confounding expert analysts and surprising their own leaders as well as corporations and government. Unions grow in sudden sharp spurts in economic crises where workers see them as the only viable voice defending worker interests. Could the crisis created by the 2008 financial disaster and the ensuing jobless recovery and fiscal deficit problems change the union situation as the Great Depression did in the past? It is possible, and not just in the sense that ?anything that is not ruled out by the laws of science is possible?. What we know from past union growth spurts is that to meet the needs of workers in a crisis unions have to reinvent their structures, strategies, and tactics. If unions have a future in the US, they will not be your parents' or grandparents' union movement but one that fits today's Internet-based society, global economy, and financial world. Unions are searching for new forms to carry out their historic function of representing the interests of workers. If they find one that succeeds, they have the potential to rebuild themselves as a vibrant social force. If they fail, employees outside of the union movement, social entrepreneurs or even managers concerned about worker well-being, may find a way to rebuild labor's voice in the US economy. How might such a future employee organization/union movement differ from the unions of today? One possibility is that it would rely less on collective bargaining and more. Unions have played a significant role in the US workforce but what will they look like in the future. ...read more.