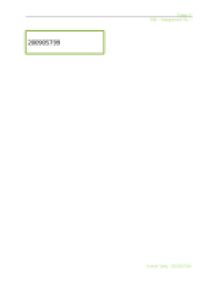 ﻿Page | ________________ GBI ? Assignment No. 1 200905799 ________________ Use appropriate analytical tool(s) discuss costs and benefits of globalization in the context of globalization processes of one the following emerging economies China India Russia Brazil Over many centuries, human societies across the world have formed increasingly closer contacts. But recently, the pace of global amalgamation has dramatically increased even more. Extraordinary changes in communications, transportation, and computer technology have given the process a new drive and made the world more interdependent than ever. So many corporations manufacture products in many countries and sell to consumers around the world ? these are what are known as multinationals and are possibly, one of the major contributors to globalization. Money, technology and raw materials move ever more swiftly across countries. And not just these, in fact, even people have become directly involved in the process ? the movement of labour internationally, triggered by labour mobility. Along with products and finances, ideas and cultures flow more freely. As a result, laws, economies, and social movements are forming at the international level. Globalization can be defined as the movement of goods and services across national borders. ?Globalization is a process of interaction and integration among the people, companies, and governments of different nations, a process driven by international trade and investment, aided by information technology. This process has effects on the environment, on culture, on political systems, on economic development and prosperity, and on human physical well-being in societies around the world.?[1] Globalization has never been un-known to man, neither is it a new concept. ...read more.

They build foreign factories and carry out production in each country separately, mainly to reduce their costs. What this does for the host countries is that it increases movement of goods and services. These multinationals import raw materials and sometimes even labour from other countries. They pay taxes to the host country’s government and the managers that they bring from other countries train the local workers. Examples include McDonalds opening up in India along with other franchises such as Café Coffee Day, KFC, etc. “A defining feature of globalization is an international industrial and financial business structure.”[7] Globalization is also very beneficial as it brings about economies of scale to a very large extent. Due to the greater freedom of movement of goods and services, many countries have now started outsourcing work to companies in countries where labour is cheaper. (Lal, 1988, 2003) has drawn attention to “more than a doubling of India’s industrial production between 1886 and 1914, and to the fact that by 1914, India had the world’s fourth largest cotton textile industry, and the second largest jute manufacturing industry.” India has become very well known for its cheap labour because of which it has become a popular choice for companies that are trying to cut down costs. An example could be that of clothing companies such as Nike that get all their products made from India[8]. ...read more.

Globalisation has intensified competition between economies in the world market. As a result, economic developments are not determined entirely by domestic policies and market conditions. In fact, they are also influenced by international policies and economic conditions. So it is clear that a globalising economy, while formulating and evaluating its domestic policy cannot afford to ignore the possible actions and reactions of policies and developments in the rest of the world. With reference to (Stiglitz, 2002), ?In many countries, globalization has brought huge benefits to a few with few benefits to the many. But in the case of a few countries, it has brought enormous benefits to the many?. In a world beset by conflicts, globalization probably has a net negative impact; conversely, in a cooperative world, globalization probably has a net positive impact. Thus, ?globalization represents a major challenge and at the same time, an unprecedented opportunity in terms of possibilities for conflict or cooperation.?[15] In relation to India, I believe that globalization has brought more benefits than costs. This is because it has put the country in the limelight and has opened up new opportunities in terms of fast food chains, sports equipment, call centers and software ? according to Bill Gates in 2002, ?India was on course to become a global hub for 'mission critical activity' in software?. The costs incurred from globalization can be minimized with the help of efficient management of the economy as the benefits outweigh them. According to (Stiglitz, 2002) ?the problem is thus not with globalization but with how it has been managed. ...read more.