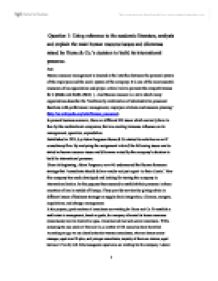 Question 1- Using reference to the academic literature, analysis and explain the main human resource issues and dilemmas raised by Hume & Co.'s decision to build its international presence. Ans- Human resource management is situated at the interface between the personal system of the employees and the social system of the company. It is one of the most essential resources of an organization and plays a critical role to promote the competitiveness for it (Stella and Smith, 2003) ). And Human resource is a term which many organizations describe the 'traditionally combination of administrative personnel functions with performance management, employee relations and resource planning' (http://en.wikipedia.org/wiki/Human_resources). In present business scenario, there are different HR issues which normally have to face by the multinational companies, that are creating immense influence on its management, operation, expandation. Established in 1973, by Adam Ferguson Hume & Co started its activities as an IT consultancy firm. By analyzing the assignment in brief, the following issues can be stated as human resource issues and dilemmas raised by the company's decision to build its international presence. Since its beginning, Adam Ferguson, now 64, underscored the Human Resource strategy that 'consultants should deliver results-not just report- to their clients'. Now this company has much developed and looking for turning the company in internationalization. In this purpose they succeed to establish their presence in three countries of one is outside of Europe. They provide services by giving advice in different issues of business strategy on supply chain integration, alliances, mergers, acquisitions, and change management. In this purpose, good numbers of consultants are working for Hume and Co. To establish a stable state in management, based on grade, the company allocated its human resources (consultants) into two distinctive types. Consultant advisor and senior consultants. While analysing the case study of Hume & Co, a number of HR issues has been identified. According to age, we can identify that the veterans consultants, who are former senior manager, aged over 50 plus, and younger consultants, majority of them are women, aged between 27 to 40, with little managerial experience are working for this company. ...read more.

Consultants more mentionable, women consultants in Head Quarter, and consultants working in Germany are more responsible for their own career. Consultants left the job when they can realize moving to other companies will definitely bring career improvement. They are giving great attention to their career of the first category. Proper recruitment policy is not following all in all areas, where the company has its business activities. Well recognised companies which are moving globally are mainly following internet as a recruitment tool. E-recruitment is on the rise in International companies based in France (Cerdin and Peretti ,2001). But the most common recruitment process is normally the traditional employment interview. Large companies in France, the recruitment process normally requires three interviews, and the final selection is done by the manager, who deals with the new employ's performance (Cerdin and Peretti, 2000). However, country manager in India of Hume & co. does not follow this procedure. His management style is creating debate. He is recruiting family members as company employee, on the other hand, advocating for sacrificing profit to build market share. If he succeed to in implementing his plan, the bonus payment and the number of days per year will be trim down for the consultants working on Indian based projects. Inspite of these HR issues and dilemma, he is successful in increasing profit turnover. The activities need to be increased of Hum and Co. considered its working load. Clients are about their service but sometimes due to efficient staff and loads of work, the management in UK, Germany, India, China are facing problem to complete the task on time. In that case the company have to spend extra money for hiring several expensive freelancers. Q: Does research into national cultures offers a useful means for analysing Hume & Co.'s new operational context? Outline and apply one of the main culturist theories to this case- and discuss any limitations of these approaches. ...read more.

Feminine culture defines cultural values such as the quality of life, maintaining personal relationships and care for the week and the environment are emphasized. People living in USA, Singapore, India, Hong Kong, UK prefer to accept challenge in working life, tend to value a high opportunity for earning, looking for recognized their work while doing job. On the other hand, in feminine culture, people looking for keeping good working relation with supervisor, prefer to work with cooperative people, looking for living in an area which is suitable for themselves and for their family, looking for job security. France is holding this feminine culture (Salk, Jane E & Brannen, Mary Yoko, 2000). * Uncertainty is fourth cultural dimension means people in a culture feel nervous or threatened by uncertainty and ambiguity and create institutions and rules to try to avoid them (Edwards & Rees, 2006). It is high in India, Shanghai (China) but low in Germany, France, UK, Singapore. * Time orientation is the fifth dimension, which originally termed 'Confucian dynamism', indicates to the time horizons that people in different cultures are oriented towards, with some looking several years ahead in deciding upon particular courses of action and others geared to the shorter term (Edwards & Rees, 2006). Hofstede's Cultural Clusters (Edwards & Rees, 2006) Limitation of Hostede Cultural Dimension- Inspite of effectiveness of Hofstede Cultural dimension in understanding the national cultural context that can assist the Hume & Co. in better understanding the intercultural difference within regions and between countries, there are some limitations as well. Though the Hofstede theory was categorized by country, there can be more than one cultural group within one country. As an example, Canada can be mentionable, where two types of cultural group are living in this country. Majority of the population are English speaking, whereas in Quebec, the minority French speaking people living there. Between these two group has moderate cultural difference (cyborlink.com/besite/hofstede.htm). So this theory is helpful in understanding the cultural difference, but the Hume & Co. can not apply in all region. They need to consider the market share and other factors. ...read more.