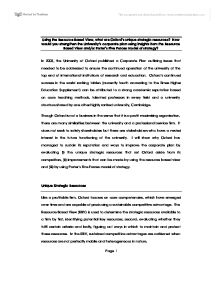 In 2005, the University of Oxford published a Corporate Plan outlining issues that needed to be addressed to ensure the continued operation of the university at the top end of international institutions of research and education.  Oxford’s continued success in the world ranking tables (currently fourth according to the Times Higher Education Supplement) can be attributed to a strong academic reputation based on core teaching methods, talented professors in every field and a university structure shared by one other highly ranked university, Cambridge.

Though Oxford is not a business in the sense that it is a profit maximising organisation, there are many similarities between the university and a professional service firm.  It does not seek to satisfy shareholders but there are stakeholders who have a vested interest in the future functioning of the university.  I will show why Oxford has managed to sustain its reputation and ways to improve the corporate plan by evaluating (i) the unique strategic resources that set Oxford aside from its competitors, (ii) improvements that can be made by using the resource based view and (iii) by using Porter’s Five Forces model of strategy.

Like a profitable firm, Oxford focuses on core competencies, which have emerged over time and are capable of producing a sustainable competitive advantage.  The Resource Based View (RBV) is used to determine the strategic resources available to a firm by first, identifying potential key resources, second, evaluating whether they fulfil certain criteria and lastly, figuring out ways in which to maintain and protect these resources.  In the RBV, sustained competitive advantages are achieved when resources are not perfectly mobile and heterogeneous in nature.

Essentially, Oxford’s competitive edge relies on the fact that it attracts talented professors and academics in a wide range of fields, to live within the university grounds whilst conducting research and teaching.  Primarily, the tutorial system which allows the professor to focus on a few individuals once a week to nurture their skills is a valuable, rare, inimitable and non-substitutable resource.  By its very definition, if a resource is valuable, inimitable and non-substitutable, it is most likely to be a rare one.  Secondly, the collegiate system and basic university structure means that students are assigned a college on top of being members of a university.  Even though this detracts from the communal feel of the university, it is currently rare and non-substitutable as applicants are not allowed to apply to both Cambridge and Oxford.  It is imitable and smaller collegiate systems have been introduced in the University Durham, however, on a larger scale, it would not be cost effective to follow a similar structure as there are significant experience barriers to entry.

The Oxford University Press, library holdings and online library access systems are some of the most advanced collections compared to other top ranked universities.  Not only does this help to draw in academics, but it ensures that the best domestic and international students consider applying to the university.  Though libraries are substitutable, the fact that the Bodleian is the biggest library in Europe it is definitely a valuable and inimitable resource.

Improvements using the Resource Based View

“The real issue has been the inept management of the university's central institutions - a morass of committees with ill-defined and overlapping responsibilities” (Kay, 2005).  I feel that Oxford has depended on the academic resource of talented individuals as value is added by developing a set of relationships which others are unable to make.  To sustain their reputation Oxford should find a way to restructure the university such that each college functions as part of the whole university rather than having each college seen as a single strategic business unit (SBU).  Part of the problem has been the fact that the management has not been able to adapt to changing situations in terms of an increase in the number of applicants both domestic and international, higher tuition fees and government funding.

The downfall of La Sorbonne from being one of the biggest universities in Europe, to splitting into thirteen individual colleges and universities known collectively as the University of Paris, was partly due to each part of the university being individually classified by subject.  The collective standing of the University of Paris has dropped significantly and the funding was being split in so many directions that its reputation at the top could not be maintained.

Aside from the structural internal architecture of the university, Oxford needs sufficient funding to ensure that contact time in tutorials and lectures is retained, as that is their distinctive capability.  Compared to the Ivy League universities in the US, which are mainly private, tuition fees are paid by the government to the university rather than to the student.  This allows the government to have a certain amount of leverage over the university and its admissions selections.  Oxford has already differentiated the type of education they offer, nevertheless, I believe that focusing more on research would bring in extra funding as well as ensuring that academics choose to base their research in Oxford due to predecessors and research facilities rather than going to the US.

Initially, the students are the consumers of one of two of the main products, teaching and research, that the university provides.  During the course of their degree, they become the product of successful teaching and those who continue to study for a doctorate, often start to teach themselves.  Although this is a not a unique process exclusive to Oxford, it is one that should be highlighted when using Porter’s analysis.  There are limitations on Porter’s five forces as only those related to horizontal competition apply.  The bargaining power of suppliers is absolute as there is a strict admissions process and the bargaining power of customers is severely restricted.  By controlling the number of successful interview candidates and having a more stringent interview process, Oxford can make sure that the educational aspect remains a rare resource.

The threat of substitutable education has increased due to open global markets which have allowed universities to increase their applicant pool.  Considering that universities with larger endowments can sufficiently fund all departments as well as offering bursaries to international and domestic students, sticking to the Corporate Plan to “recruit the very best students nationally and internationally” will be more difficult.  Nonetheless, universities like the London School of Economics have had a surge in international applicants as they have focused primarily in one field and have strong career-based connections.  With the increasing intensity of the rivalry between the top universities, the threat of new entrants is unlikely as it would take time to build up reputation and business links.

Oxford’s strategic assets are primarily based on its reputation which has come from years of academic research and teaching.  In order to be able to compete internationally, the university has to sort out its finances as well as being able to retain the professors that attract potential students in the first place.  The internal architecture of the university which adds to the creational organisational knowledge through the cooperative ethic implementation of organisational routines needs to be addressed because whereas education or research in itself is substitutable, the type of education and research offered by Oxford is unique.

Strategic resource management in a university is similar to that in a professional service firm, in terms of ideas, brand and people, where the costs are incurred due to employing and facilitating resources for talent rather than actual material products. Any profits are ploughed back into the system to reinforce the strength of Oxford’s distinctive capabilities.

Kay, J. (08 March 2005) The Management of the University of Oxford.  The Financial Times