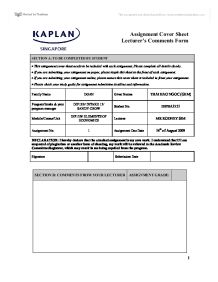 SECTION A: TO BE COMPLETED BY STUDENT * This assignment cover sheet needs to be included with each assignment. Please complete all details clearly. * If you are submitting your assignment on paper, please staple this sheet to the front of each assignment. * If you are submitting your assignment online, please ensure this cover sheet is included in front your assignment. * Please check your study guide for assignment submission deadline and information. Family Name DOAN Given Names THAI BAO NGOC (GEM) Program/Intake & your program manager DIP13B/ INTAKE 13/ SANDY CHOW Student No. DIPBA1321 Module/Course/Unit DIP13B/ ELEMENTS OF ECONOMICS Lecturer MR RODNEY SIM Assignment No. 1 Assignment Due Date 16th of August 2009 DECLARATION: I hereby declare that the attached assignment is my own work. I understand that if I am suspected of plagiarism or another form of cheating, my work will be referred to the Academic Review Committee/Registrar, which may result in me being expelled from the program. Signature Submission Date SECTION B: COMMENTS FROM YOUR LECTURER ASSIGNMENT GRADE: DEVELOPMENT OF VIETNAM'S ECONOMY (2003 - 2009) AND THE FINANCIAL CRISIS NAME: DOAN THAI BAO NGOC (GEM) CLASS: DIP BA/INTAKE 13TH SUBJECT: ELEMENTS OF ECONOMICS LECTURER: MR RODNEY SIM OVERVIEW A. INTERNATIONAL ECONOMIC The global economic had been worse in the last few year. With the beginning of American's crisis in loan market due to under-standard interest rate policy, the whole of financial system has been affected negatively and it led to the most serious economic slump all over the world. ...read more.

Consequently, the prices of products and fuel rise and the GDP will grow and consumer expenditure increases. That is why GDP growth is higher in 2007. According to the World Bank (2009), the government launched "stabilization packed" policies in order to decrease inflation. More clearly, the monetary and fiscal policies were tightened, the investments and expenditure were restricted, encouraged consumers to practice thrift and adjusted the banking system. The central bank not only had to use interest-free loan to do payments for workers but also lowered the interest rate. Therefore, the central bank of Vietnam had to cut a lot of costs. On the other hand, this new policies also impact on living standards such as it is encouraged that there were not increase in prices of electricity, oil, gas, cement, fertilizers, clean water, medicines, air, train and bus ticket, tuition fees and hospital charges until June 2009. (Citation: www.dantri.com.vn, 3rd July 2009). Furthermore, the new policies also reduced the investments so a lot of projects were cancelled or delayed. That is why enterprises met some difficulties with those policies. However, because of decrease in investments and expenditure, GDP growth fell in the early 2009 (2.1) and inflation fall significantly. In the first quarter of 2009, inflation rate dropped by just over 3 per cent. (1) GDP/capita (Source: General Statistics Office of Vietnam) ...read more.

Therefore, the demand for goods would drop, so suppliers provided products less. That means they had to reduce the outputs. As a result, many workers lost their jobs because of cutting costs or their wage rate would fall. That is why when we look in the graph (5), after inflation in 2007, the unemployment rate surged up. Another problem was that a lot of people after graduation could not find a job at that time. Some example about this issue is the Canon Co., cut down 2,000 workers or Hanoimilk, had 250 workers who lost the job. (Citation: www.bbc.co.uk/vietnamese/vietnam, 11th August 2009) To solve the problem for labor market, some firms reduce working time to avoid job losses or the policies mentioned in the last part. (Citation: www.bbc.co.uk/vietnamese/vietnam, 11th August 2009). REFERENCE Library of Congress - Federal Research Division. Country profile: Vietnam, December 2005. Vietnam. Asian Development Bank (2008). Key Indicators for Asia and the Pacific. Available from: http://www.adb.org/Documents/Translations/Vietnamese/default.asp. Cited 7th July 2009. The Economic Intelligence Unit (2008). Countries Report: Vietnam. Available from: www.eiu.com. Cited 9th July 2009. CIA World Fact Book (2008) Vietnam. Available from: https://www.cia.gov/library/publications/the-world-factbook/geos/vm.html. Cited 7th July 2009. Thanh, P. and Quynh, N (2009). Assist dismissed workers caused by economic downturn. Available from: www.dantri.com.vn. Cited 3rd July 2009. General Statistics Office of Vietnam (2009). Monthly Statistic Report. Available from: www.gso.gov.vn. Cited 7th July 2009. World Bank (2008) East Asia and Pacific Update: Navigating the Perfect Storm. BBC (2008) "Vietnamese firms are cutting down their employment size". Available from www.bbc.co.uk/vietnamese/vietnam. Cited 11th August 2009. ?? ?? ?? ?? 1 ...read more.