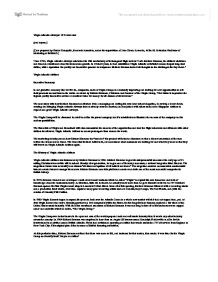 Virgin Atlantic Airways: 10 Years Later (and beyond) (Case prepared by Pantea Denoyelle, Research Associate, under the supervision of Jean-Claude Larreche, Alfred H. Heineken Professor of Marketing at INSEAD.) "June 1994, Virgin Atlantic Airways celebrated its 10th anniversary of its inaugural flight to New York. Richard Branson, the airline's chairman and founder, reminisced about its tremendous growth. In 10 short years, he had established Virgin Atlantic as Britain's second largest long-haul airline, with a reputation for quality and innovative product development. Richard Branson turned his thoughts to the challenges that lay ahead." Virgin Atlantic Airlines Executive Summary In our globalize economy that we live in, companies, such as Virgin Group are constantly improving and looking for new opportunities to sell their products and services to the world. As stated by Richard Branson, Chairman and Founder of the Virgin Group, "Our vision is to provide the highest quality innovative service at excellent value for money for all classes of air travelers." The case study tells how Richard Branson has climbed from a managing and editing his own local school magazine, to owning a record label, creating and bringing Virgin Atlantic Airways into an already crowded market, and has joined with others such as the Singapore Airlines to expand and grow Virgin Atlantic Airways. The Virgin Group will be discussed in detail to define the parent company and it's subsidiaries to illustrate the success of the company and its endless possibilities. The financials of Virgin and its outlook will also demonstrate the success of the organization and how the flight schedules and alliances with other airlines has allowed Virgin Atlantic Airlines to access passengers from around the world. The marketing techniques and how Richard Branson has "branded" his product will also be discussed so that a clearer understand of the man behind the dream can be found. The ideas that Richard believes in, are understand what customers are looking for and what they want so that they will travel on Virgin Atlantic Airlines again. ...read more.

In 1999 Virgin Express Ireland was founded to avoid strict Belgian labour laws and high costs. Virgin Blue: This is the newest Virgin Airline company operating in Australia as a low cost airline. It started in 2000 with five Boeing 737-400 airplanes. The start had a setback due to the increase in oil-prices, devaluation of the Australian Dollar and the competitive strengths of Quantas and Ansett, the two other Australian airlines. The plan to make a loss for three years will probably be overtaken by reality, making the time to get the first profit probably longer (Business Week, 2000). Virgin Blue is gambling on the surge in Australian air travel for this future profitability. Virgin Rail: Virgin entered the UK privatised rail industry with Virgin Rail launched in 1997. It consists of 20-year franchises to operate two UK railway networks: *CrossCountry - a series of routes that traverse the UK. *West Coast - the main route from London to Glasgow. These franchises were awarded to Virgin by competitive tendering following the privatisation of the British Rail network. Virgin is a train operator (rolling stock, ticketing offices, staff) whereas the tracks, signalling and stations are owned and operated by Railtrack, overseen by the government regulatory body - the Strategic Rail Authority. In 1999, Virgin Rail split its equity to incorporate a 49% holding from Stagecoach, a privately owned bus company. Virgin's reputation in the rail industry has been mixed. It has suffered from poor public relations including complaints regarding dirty trains, delays, and poor food. Customer numbers have also decreased recently in the aftermath of the Hatfield crash and the repairs required to the railway lines that have resulted in significant disruption and delays to services. Virgin Rail has attempted to win back customers through half-price ticket schemes, but the difficulties in even purchasing such tickets has initially led to further complaints. Virgin's goal to turnaround the rail service delivery concept is a definite challenge in a traditionally difficult sector. ...read more.

Virgin also needs to consider alliances and mergers (with telecom companies for example) if the speed of organic growth is insufficient to meet with its required targets. It is important however throughout these processes that Virgin maintains the clarity and integrity of its brand. The B2B aspects of e-commerce are already projected to provide Virgin with significant economies, and such savings can be expanded across the range of its operations.We believe that Virgin's existing strong brand can be leveraged to yield further success via the Internet. A unified approach will ultimately also reinforce the brand, and leverage the formation of further businesses. As has been seen in the Far East, Virgin's strong brand can successfully be used to leverage substantial partner capital inflows. 3)Improve the leadership and organisation Virgin's dependability on Richard Branson has to be reduced, so that its future beyond Branson can be assured. The organisation's culture, image and values need to be aligned to enable a strong, profitable market-driven organisation. In this respect, Virgin's recent establishment of the "Virgin Charter" is a significant step in the right direction. Virgin needs to develop strong leadership across its organisation and to leverage its synergies and knowledge management. 4)Realign the financial objectives Virgin needs to address its financial weaknesses. Companies that do not have a profitable future need to be discontinued without adversely affecting the brand image. Continuous cross subsidising of failing ventures can ultimately weaken the Virgin Group. The disintegration of Virgin should Branson depart is a real threat, especially since Virgin is substantially owned by Branson's offshore family trusts. It is difficult to envisage the Branson trust continuing its involvement in Virgin, given that active family involvement would be required. It is more likely that individual companies would be sold to the highest bidder, and maybe even a purchaser for the brand would be sought. It is for this reason that Virgin may need to consider an initial public offering of its shares. The main advantages of an IPO are a greater access to capital markets and a greater market drive (i.e. profit and growth oriented). ...read more.