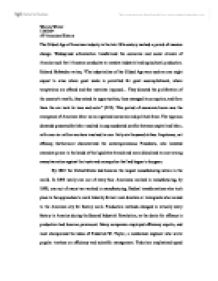 Warren Winter 11/01/04 AP American History The Gilded Age of American industry in the late 19th century marked a period of massive change. Widespread urbanization transformed the economic and social climate of America such that it became conducive to massive industrial and agricultural production. Richard Hofstadter writes, "The industrialists of the Gilded Age were such as one might expect to arise where great waste is permitted for great accomplishment, where temptations are offered and few restraints imposed... They directed the proliferation of the country's wealth, they seized its opportunities, they managed its corruption, and from them the era took its tone and color" (213). This period of economic boom saw the emergence of American labor as an organized economic and political force. The vigorous demands presented by labor resulted in unprecedented conflict between capital and labor, with over six million workers involved in over thirty-six thousand strikes. Impotence, not efficacy, furthermore characterized the contemporaneous Presidents, who invested extensive power in the hands of the legislative branch and were disinclined to exert strong executive action against the trusts and monopolies that had begun to burgeon. By 1894 the United States had become the largest manufacturing nation in the world. In 1860 nearly one out of every four Americans worked in manufacturing; by 1900, one out of every two worked in manufacturing. ...read more.

Standard Oil stockholders began to buy up shares in other companies as well; under the regulations for a holding company, management of various companies could be joint as well. Standard Oil stockholders became the majority holders in other oil companies, allowing Standard Oil management to run these companies also. By the early 1890s Standard Oil had merged 43 oil-producing companies together under their control and produced nearly 90 percent of all oil in America. Standard Oil also achieved vertical integration when the company not only moved to control production but also the marketing and distribution of the finished product. Similar examples of vertical integration were found in many other companies, as in Gustavus Swift's similar control over the meat-processing industry. Carnegie Steel's operation is often cited as the best example of vertical integration in this era. In the ethical treatment of the economic activities that ensued during the Gilded Age, the philosopher Herbert Spencer became intrigued by Darwinism and natural selection, which held that only the most well-adapted individuals in a population will survive and reproduce. Spencer suggested a parallel between economics and nature, coining the phrase "survival of the fittest" to describe the competition among human individuals and groups. He argued that human progress resulted from the triumph of more advanced individuals and cultures over their inferior competitors. ...read more.

was organized by crafts and consisted almost exclusively in skilled workers. In contrast to the idealism of the Knights of Labor, the A.F.L. bargained for practical issues such as higher wages and shorter hours. By 1917 the A.F.L. had over 2.5 million members. Although the union used strike tactics on many occasions it strenuously avoided the appearance of being controlled by radicals. Miners in the West also were engaged in labor activity, and in late 1905 helped to found the Industrial Workers of the World (I.W.W.), which reflected the ideology of the Knights of Labor. Union literature was saturated with the Marxist themes and concepts of class conflict, violence, and the appeal of socialism. The union came to a conclusion during World War I when many of its leaders were jailed. The labor movement proved fatally limited: Even by 1915 only 12 percent of the workforce was unionized. According to Burton W. Folsom, "irregardless of which government, whether federal, state, or local, or which commodity were involved, government-run businesses are considerably less efficient and prosperous than their free-market counterparts" (126). Through the laissez-faire policies of government in the Gilded Age, corporations gained unilateral advantage in the inevitable conflict with the labor force. The Second Industrial Revolution, propelled by a momentum rigged or no, transformed the climate of the American economy by redefining its parameters of power dynamics. ...read more.