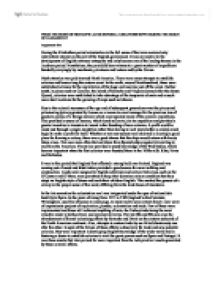 Were the seeds of Britain&amp;#146;s later Imperial greatness sown during the reign of Elizabeth I?

WERE THE SEEDS OF BRITAIN'S LATER IMPERIAL GREATNESS SOWN DURING THE REIGN OF ELIZABETH I? Arguments For During the Elizabethan period colonisation in the full sense of the term received only intermittent interest on the part of the English government. It was not central to the development of English overseas enterprise and only became one of the leading themes in the Jacobean period. Nonetheless, the period did bear witness to a great number of expeditions funded by varyingly by merchants, privateers and looters and by the Crown. Much attention was paid towards North America. There were many attempts to establish colonies and bases along the eastern coast. In the north, around Newfoundland, these were established as bases for the exploitation of the huge cod reserves just off the coast. Further south, in places such as Carolina, the island of Roanoke and Virginia (named after the chaste Queen), colonies were established to take advantage of the temperate climate and as such were ideal locations for the growing of crops such as tobacco. ...read more.

Piracy also provided a sound knowledge of the West Indies, which became important when the first colonies were founded there in the 1620s at St. Kitts, Nevis and Barbados. It was in this period that England first effected a strong hold over Ireland. England was running out of wood and Irish timber provided a good source for naval refitting and construction. Lands were assigned to English noblemen and certain Irish clans, such as the O'Connor and O'More, were permitted to keep their domains only on condition that they adopt an English style of dress and teach their children English. This marked the genesis of a colony in the proper sense of the word, differing from the trade bases of elsewhere. In the late seventies the colonisation zeal was invigorated under the spur of nationalistic hostility to Spain. In the years of rising from 1577 to 1585 England's chief minister, Walsingham, used his influence to encourage, to assist and to some extent direct a new wave of expansionist projects of exploration, plunder, colonisation and trade. ...read more.

It began with the creation of the East India Company in 1600, the stimulus to which came not so much from within as from without, in the sense that the Dutch merchants set the pace and the Londoners could not afford to be left behind. But in the years 1602-4 the English took the initiative on several fronts at once: in the West Indies they moved into the contraband trade on a large scale; in Guiana Leigh, after reconnoitring the coast in 1602, set up his Wiapoco colony in 1604; in 1602 began the two series of voyages - to southern and northern Virginia respectively - which led to the birth of the Virginia Company in 1606; and in 1602 also Waymouth pointed the way into the strait which Hudson finally traversed eight years later. It was England's chief minister Sir Robert Cecil, later earl of Salisbury, who was behind many of these colonial expeditions. Though, he was largely aided by the fact that both Nottingham and Ralegh, themselves fervent supporters of overseas expansion, also stood at the centre of power. ...read more.