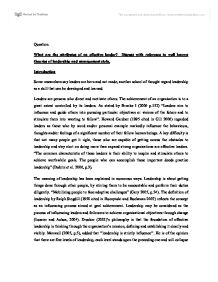 What are the attributes of an effective leader? Discuss with reference to well known theories of leadership and management style.

Question: What are the attributes of an effective leader? Discuss with reference to well known theories of leadership and management style. Introduction Some researchers say leaders are born and not made, another school of thought regard leadership as a skill that can be developed and learned. Leaders are persons who direct and motivate others. The achievement of an organisation is to a great extent controlled by its leaders. As stated by Brooks I (2006 p.152) "Leaders aim to influence and guide others into pursuing particular objectives or visions of the future and to stimulate them into wanting to follow". Howard Gardner (1995 cited in Gill 2006) regarded leaders as those who by word and/or personal example markedly influence the behaviours, thoughts and/or feelings of a significant number of their fellow human beings. A key difficulty is that not many people get it right, those who are capable of getting across the obstacles to leadership and stay alert on doing more than expand strong organisations are effective leaders. "The common characteristic of these leaders is their ability to inspire and stimulate others to achieve worthwhile goals. The people who can accomplish these important deeds practice leadership" (Dubrin et al. 2006, p.3). The meaning of leadership has been explained in numerous ways. Leadership is about getting things done through other people, by stirring them to be accountable and perform their duties diligently. "Mobilizing people to face adaptive challenges" (Gary 2005, p.34). The definition of leadership by Ralph Stogdill (1950 cited in Huczynski and Buchanan 2007) reflects the concept as an influencing process aimed at goal achievement. Leadership may be considered as the process of influencing leaders and followers to achieve organisational objectives through change (Lussier and Achua, 2004). Drucker (2001)'s philosophy is that the foundation of effective leadership is thinking through the organisation's mission, defining and establishing it clearly and visibly. Maxwell (2005, p.5), added that ''leadership is strictly influence''. ...read more.

Authoritative leadership maximises dedication to the organisation's objectives and plan. Affiliative leaders generates emotional connection and harmony (''People come first''), this type of leadership rotates around people; this leader is more bothered about people's emotions than tasks and goals. The style of leadership promotes communication, flexibility, permits consistent innovation and risk taking. However, despite its benefits, Goleman advised that the affiliative style should not be used alone. If relied on, this style can lead to failure. For example, a Senior Manager in a branch of Zenith Bank Plc was seen by his subordinate as a perfect leader. He shared ideas with them, was flexible and did not impose unnecessary strictures on how employees get their work done. However, a major fraud occurred in the branch, the Head Teller in conjunction with the some other staff members colluded with a customer to defraud another customer's account. The Branch Head was blamed for his laxity in the branch's operation. Democratic leaders build harmony through participation. Being a participative leader is not always easy, because it requires letting go. You have to trust all the people who work with you to make wise management decisions (Schaeffer 2002). Before going for Operations Meeting at the Head office, the Head of operation (HOP) in a Zenith bank branch usually calls a meeting of all operation staff and requests for suggestions and new ideas, he would then take the issues to the meeting. He also takes time in explaining management's actions. The HOP exemplifies the democratic style by spending time in clearing up the basis for the action and also getting people's feedback. This built trust, admiration and dedication. Pacesetting leaders anticipate distinction and self-direction, this leader sets standards and exemplifies them himself. He is infatuated about doing things better and more rapidly and expects his subordinates to do same. This style is comparable to the coercive style, it demolishes people's self-esteem, subordinates feel that the leader does not trust them to work on their own or to take the initiative; work turns out to be so task focused and boring. ...read more.

Greenleaf (1977 cited in Gill 2006, p. 40), further said 'Great leaders serve others'. A servant leader is one who is a servant first, with characteristics like: Listening, Empathy, Healing, awareness, Persuasion, conceptualization, Foresight, Stewardship, commitment to the growth of people and building community (Larry C.Spears and Michele Lawrence 2004 cited in Wilson 2008). However, Tom Marshall (1991, p.67 cited in Gill 2006, p.41) had a different take, he said ''after all, leaders lead, servants serve. If leaders are going to be servants, what are the servants going to do, and who is going to do the leading?'' Conclusion In conclusion, both innate qualities and learned skills could be classified as attributes of an effective leader. This assessment of leadership theories has shown that there is no straightforward answer to why effectiveness varies in leaders and best leadership style does not exist. What matters is that the style adopted should fit with the expectations of those being led and be consistent with the task at hand (Goleman 2000). Theoretically, there are numerous attributes of an effective leader but in the real world; leaders do not need to have all of it to be effective. Leaders have diverse type of behavioural approach which depends on their leadership style, when it is used appropriately, it will make them an effective leader. The components which contribute to an effective leader differ depending on the circumstances, including the features of the group and of the leader. Similarly, the style used will also be affected by these components. An effective leader will be capable of directing the team to achieve their goals and become a thriving team. In all of these theories and leadership concepts, there's a fundamental message that leaders must have a range of features working in their support. ''Leadership ability is the lid that determines a person's level of effectiveness. The lower an individual's ability to lead, the lower the lid on his potential. The higher the ability, the greater the effectiveness'', that is why in times of trouble; organisations naturally look for new leadership (Maxwell 1998, p.1). ...read more.