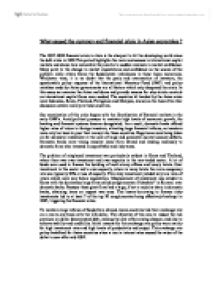 What caused the currency and financial crisis in Asian economies ?

What caused the currency and financial crisis in Asian economies ? The 1997-1998 financial crisis in Asia is the sharpest to hit the developing world since the debt crisis in 1982.This period highlights the main weaknesses in international capital markets and shows how vulnerable they can be to sudden reversals in market confidence. Many point to the change in market expectations and confidence as the source of the problem while others blame the fundamental imbalances in these Asian economies. Whichever view, it is no doubt that the panic and overreaction of investors, the questionable policy response of the International Monetary Fund {IMF} and policy mistakes made by Asian governments are all factors which only deepened the crisis. In this essay we examine the Asian meltdown and provide reasons for why stricter controls on international capital flows were needed. The countries hit hardest by the Asian crisis were Indonesia, Korea, Thailand, Philippines and Malaysia, known as the Asian five. Our discussion centers mainly on these countries. Our examination of this crisis begins with the liberalisation of financial markets in the early 1990's. Amid political pressure to maintain high levels of economic growth, the banking and financial systems became deregulated. ...read more.

Investments were not providing large enough rates of return and the threat of default on payment on the principle debt amount plus service charges resulted in lenders no longer willing to roll over short term loans. Capital flight struck when investors tried to get their money out of these countries as quick as possible. The withdrawal of foreign capital caused exchange rates to depreciate and interest rates to soar causing a rapid rise in Non Performing Loans {NPLs}. Many real estate projects, financed on unhedged dollar denominated loans, went bankrupt, under the weight of currency depreciation. Even domestic investors grabbed their money in a rush to buy dollars as the value of the currency plummeted. This created a huge contractionary shock in several Asian countries. The closure of banks severely restricted bank lending because, {1} they were illiquid and {2} because they were forced to maintain capital adequacy ratios required by bank supervisors. In Indonesia, Korea and Thailand, this rush to improve capital adequacy ratios under threat of closure of under-capitalised banks by the IMF was particularly evident. Yet this only added to panic and contractionary force. The introduction of IMF programs in this period threatened bank closures as required restoration of adequacy minimum capital standards, tightened domestic credit and enduced fiscal policy contractions all added to the banking panics already underway. ...read more.

Closure was not the only option for problem banks. They could have been put under receivership, protecting depositors and allowing good borrowers continued access to credit. The time scale problem re-appears on the issue of how quickly should banks have been to re-capitalise during such a period of economic turmoil. Immediate request of re-capitalisation increases distress for private firms and leads to a rise in non-performing loans {NPLs}, this problem being particularly evident near the end of 1997. A lesson learnt by the IMF is that in order for policies to operate without causing further economic distress is that an appropriate time scale must be applied so that panic is kept to a minimum. The events that took place in the Asian five over the period we have discussed certainly, in my opinion, provide a very strong argument for the introduction of controls on international capital movements. Protecting countries from such economic chaos that was evident in Asia is of paramount importance to the world wide economy. Yet, when considering the construction of mechanisms to control international capital flows, it is of vital importance that such controls do not hinder trade finance or production. Economic growth is a top priority for all developing countries, so to introduce restrictive controls over their interaction with foreign economies is a delicate issue, and must be given serious consideration. ...read more.