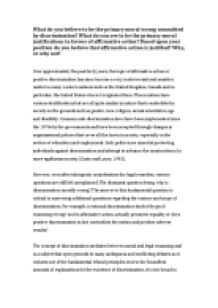 ﻿What do you believe to be the primary moral wrong committed by discrimination? What do you see to be the primary moral justifications in favour of affirmative action? Based upon your position do you believe that affirmative action is justified? Why, or why not? Over approximately the past forty years, the topic of affirmative action or positive discrimination has since become a very controversial and sensitive matter in many western nations such as the United Kingdom, Canada and in particular, the United States where it originated from. These nations have various stratifications but are all quite similar in nature that is embedded in society on the grounds such as gender, race, religion, sexual orientation, age and disability. Common anti-discrimination laws have been implemented since the 1970s by the governments and have been accepted through changes in organisational policies that cover all the facets in society, especially in the sectors of education and employment. Such policies are aimed at protecting individuals against discrimination and attempt to advance the construction of a more egalitarian society (Coate and Loury, 1993). However, even after taking into consideration the legal remedies, various questions are still left unexplained. The dominant question being, why is discrimination morally wrong? The answer to this fundamental question is critical to answering additional questions regarding the essence and scope of discrimination. ...read more.

By following a deontological approach to analyse the case by the use of Kantianism conveys that the respect of people should exist and it is an obligation within the institution to express the equality. Kantian theory argues that: ?...human beings should be treated as ends and never used merely as means. At a minimum, this principle means that each individual has a moral right to be treated as a free person equal to any other person and that all individuals have a correlative moral duty to treat each individual as a free and equal person? (Velasquez, 2006, p.321). The obligation of the Metropolitan Police however was not fulfilled as they failed to enforce their stance on their equality policy and as a result, many ethnic minorities felt discriminated against and treated unjustly and therefore the organisation is regarded as immoral and unethical. Consequently, the reputation of the organisation has deteriorated and recruitment and diversity issues have arisen due to potential ethnic minorities being discouraged from joining the force. This is illustrated by the statistics that ?within the 43 police forces, 5% of police officers were from a minority ethnic group compared to 9% in the general population? (Parliament.uk, 2013). The ethnic minorities should not be discriminated subject to their stereotype of their respective groups that degrades themselves as individuals and instead should be given opportunities based on attributes such as experience, potential, intelligence etc. ...read more.

Also, businesses may have to lower their standards in order to accept a less qualified person over a more qualified one to meet diversity goals. The outcome is favourable towards the minorities as they are benefitting whilst the whites are being punished. Regardless of the importance of achieving set goals of diversity, affirmative action is self-defeating itself as it sill discriminates (reverse) and still violates human rights but can be morally justified if it is based on good reasoning such as merit and competence and by taking into account any other factors would deem such actions as unjust. For example, should a factor such as race have precedence over accomplishments in an area that is as serious as the science and practice of medicine? The system itself is hardly meritocratic thus achieving a more egalitarian society is distant. Discrimination has undoubtedly been in existence for a very long time ??but it no longer has the power to thwart blacks or any other group in achieving their economic, political and social aspirations? (D?Souza, 1995, p. 525). There had been a time where affirmative action was useful in allowing minorities the same opportunities as others but we have advanced in our society where affirmative action is no longer useful but harms businesses. Therefore, I believe that affirmative action is not justified as it violates both Utilitarian and Kantian principles. ...read more.