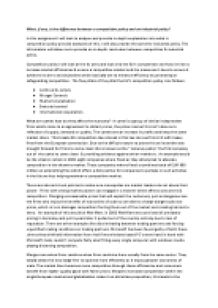 ﻿What, if any, is the difference between a competition policy and an industrial policy? In this assignment I will look to analyse and provide in-depth explanation into what is competition policy provide examples of this, I will also provide the same for industrial policy. The information will allow me to provide an in-depth conclusion between competition & industrial policy. Competition policy I will look at the its aims and look into the EU?s competition and how it tries to increase market efficiencies & ensure a competitive market and the measures it does to ensure it achieves its aim?s and objectives which basically are to enhance efficiency by promoting or safeguarding competition. The five pillars of the pillar the EU?s competition policy is as follows. * Antitrust & cartels. * Merger Controls * Market Liberalisation * State aid control * International cooperation. What are cartels how do they affect the economy? A cartel is a group of similar independent firms which come to an agreement to distort prices, the prices rise but this isn?t done as a reflection of supply, demand or quality. The cartels see an increase in profits and keep the same market share. This breaks EU competition law a break in this law can see firms hit with heavy fines from the European commission. Due to the difficult nature to prove this an incentive was brought forward for firms to come clean this is known as the ? leniency policy? the first company out of the cartel to come clean & providing evidence against other members . ...read more.

An example of one huge benefit which has come from the freedom of choice would be low cost airlines. This has made Europe an incredible small place your summer holidays no longer take all year to save for, the increased competition in the airline industry has led to firms like Ryanair eating into BA once monopoly over the market. State Aid is generally prohibited but there are certain conditions which allow for it these are some cases which don?t allow for it. An intervention by the state example would be tax reliefs, grants and holding of part or all of the company. The intervention has affected trade between member states thus distorting competition. When is state aid allowed? State aid is allowed when promoting small or medium sized enterprises, these starts up grants are key to providing local jobs. Research & development are key increasing productivity innovation in technology and medical treatments is what keeps western economies are the worlds powerhouse economies. Also when consumers interests put at risk like a bank on the brink of liquidation unable to release the customers savings it?s in the nations interest to save the bank. International cooperation can the European Commission examine mergers & cartels outside the EU? Yes it can if it affects the interests of the EU member states. The reason it is able to operate outside the EU is because of its massive purchasing power, countries outside of the EU are not willing to lose their largest importers of their goods so they abide by EU competition law. ...read more.

Industrial Policy affects market sectors which affect the economic welfare of the nation. The health of a nation and its people surely needs to be regulated to put this to the chance of the privet sector in my eyes would be foolish, privet firms seek to maximise profits and consumer needs come second. The public sector is not infallible there has been cases of these companies abusing their market power. There infrastructure of the nation needs to be controlled by its government to release complete control leaves the nation vulnerable. It also tries to subsidize certain markets are in decline the government seek to fund them are counteract any market failures one example of that would have been the coalmine. The main difference between the policies is really that the privet sectors main interest is profit maximising and cost effectiveness, the competition policy reflects this. It creates a market where it is able to do these fairly tackling issues such as cartels & monopolies these type of firms distort prices. Industrial action tackles a nation?s economic welfare and all the infrastructure surrounding it, it understands to leave the invisible hand of the markets to such important sectors would create too much uncertainty in such vital areas of the economy. It may not have the efficiencies of the private sector or the benefits of competition but tight regulation allows government to control these sectors funding them to make sure market failure doesn?t lead to the firm?s demise. Bibliograpghy Pack and Saggi (2006) - Is There a Case for Industrial Policy? A Critical Surve Rodrik (2004) - Industrial Policy for the 21st Century http://www.jftc.go.jp/eacpf/05/jicatext/aug27.pdf = http://tutor2u.net/economics/revision-notes/a2-micro-competition-policy.html http://ec.europa.eu/competition/publications/consumer_en.pdf ...read more.