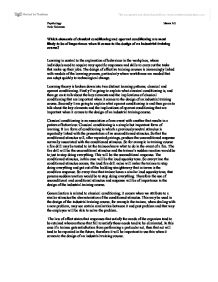 Which elements of classical conditioning and operant conditioning are most likely to be of importance when it comes to the design of an industrial training course?

Skinner believed that programmes in this case training courses should be designed to make the chances of a learner (the trainer) making a mistake as close to zero as possible. This is true to some extent, since training is given so mistakes made can be identified and learned from, but on the other hand training an employee cannot make them a perfect candidate, who will not mistakes at all. Classical conditioning being an emotional response, whereas operant conditioning is an analytical response having to do with cause and effect. It involves thinking and reasoning. In conclusion operant conditioning should be used rather than classical conditioning in the design of an industrial training course. Overall the key elements of operant conditioning that are most likely to be used should be the response and the positive reinforcement as it increases the probability of the former response happening again, which can be useful for the industrial company. Also reward should be more likely to be used in the design of the industrial training course. It is not to say that punishment should not necessarily be used at all, but it can be used if the trainee feels the need to use it. However, it is not considered as important as the other elements in operant conditioning. Overall the key elements of classical conditioning that are most likely to be used is the unconditioned and conditioned stimulus and response. ...read more.