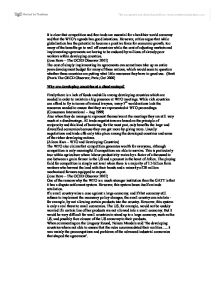 Why are developing countries at a disadvantage?

It is clear that competition and free trade are essential for a healthier world economy and that the WTO's agenda has good intentions. However, critics argue that while globalisation has the potential to become a positive force for economic growth, too many of the benefits go to well off countries while the cost of adjusting markets and implementing agreements are having to be endured by millions of already poor workers within developing countries. (Jose Bove - The OCED Observer 2001) The cost of simply implementing its agreements can sometimes take up an entire years development budget for many of these nations, which would seem to question whether these countries are putting what little resources they have to good use. ...read more.

Usually negotiations and trade offs only take place among the developed countries and some of the richer developing nations. (Aileen Kwa - WTO and Developing Countries) The WTO also claims that competition generates wealth for everyone, although competition is only meaningful if competitors are able to survive. This is particularly true within agriculture where labour productivity varies by a factor of a thousand to one between a grain farmer in the US and a peasant in the heart of Africa. The playing field for competition is simply not level when there is a majority of 1.3 billion farm workers who harvest the land with their hands and a minority of 28 million mechanised farmers equipped to export. ...read more.