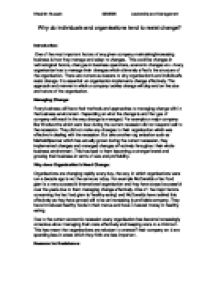 Why do individuals and organisations tend to resist change?

Why do individuals and organisations tend to resist change? Introduction: One of the most important factors of any given company maintaining/increasing business is how they manage and adapt to changes. This could be changes in technological factors, changes in business operations, economic changes etc...Every organisation has to manage their changes which ultimately effect's the structure of the organisation. There are numerous reasons to why organisation's and individual's resist change. It is essential an organisation implements change effectively. The approach and manner in which a company tackles change will depend on the size and nature of the organisation. Managing Change: Every business will have their methods and approaches to managing change within the business environment. Depending on what the change is and the type of company will result in the way change is managed. For example a major company like Woolworths which went bust during the current recession did not respond well to the recession. They did not make any changes to their organisation which was effective in dealing with the recession. But take another organisation such as Marks&Spencer which has actually grown during the current recession, they implemented changes and managed changes effectively throughout their whole business environment. This has lead to them becoming a stronger brand and growing their business in terms of size and profitability. Why does Organisation's Need Change: Organisations are changing rapidly every day, the way in which organisations were run a decade ago is not the same as today. ...read more.

Effective change management may also lead to increased team cohesion and can help reduce costs for the organisation. Changes in the business environment could also lead to increased profits and can also help attract an increased number of consumers. Bp Oil is an organisation that has made erratic changes in their business environment since the Gulf of Mexico disaster in April 2010. Since the disaster Bp has made many changes within their organisation so that they remain a successful organisation. They have sold parts of their company across the globe and have invested millions of pounds in new ventures to capture oil. The structure and goals of the organisation has been altered as well, they have a new CEO and have set aside around 20 Billion pounds to compensate for the Gulf of Mexico spill. Since the oil spill disaster BP have changed their priorities as an organisation one of the main priorities at the moment is deal with the long term damages the oil spill has caused. Kurt Lewin's change management model Kurt Lewin in the 1950's developed a management model which purely focused on change in the environment of organisations. His management model consisted of three primary stages unfreeze, change and refreeze. The first stage unfreezing focused on breaking down the core of the organisation. This stage was the most difficult as it broke down the organisation and challenged the way the business was run. ...read more.

Principle four: The people in the organisation must be interested in taking on the new changes. The people that will be interested in the changes within an organisation are those who are successful but are failing in some areas of their work. They will have the confidence to embrace the change and be motivated to work with the new changes. The people that will not be interested in change are those who are not successful, they will not have the confidence to embrace any new change. Also they will have a low motivation level so might struggle with any new changes. All the principles are essential for effective change implementation within an organisation. The principles help create methods for change and help plan the changes so they are effective. Conclusion Change is an issue which makes or breaks organisations. People always tend to resist change unless they are clear of the benefits and are willing to take the extra steps to work with the changes. Effective change management requires meticulous planning and relevant amount of time must be given for an organisation to absorb changes. Organisation's can be very complex in terms of their structure. Any change to the structure of an organisation can have a negative effect which can cause the organisation to crumble if change is not managed properly. Therefore organisations will always resist change unless change is required in order to maintain the company or take it forward. ...read more.