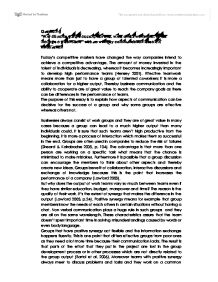 Why do some groups accomplish little, while others with similar inputs manage a great deal? Discuss with key communication research.

Question 4) "Why do some groups accomplish little, while others with similar inputs manage a great deal?" Discuss with key communication research. Introduction Today's competitive markets have changed the way companies intend to achieve a competitive advantage. The amount of money invested in the talent of individuals is decreasing, whereas it becomes increasingly important to develop high performance teams (Hensey 2001). Effective teamwork means more than just to have a group of talented coworkers; it is more a collaboration for a higher output. Thereby business communication and the ability to cooperate are of great value to reach the company goals as there can be differences in the performance of teams. The purpose of this essay is to explain how aspects of communication can be decisive for the success of a group and why some groups are effective whereas others not. Businesses always consist of work groups and they are of great value in many cases because a group can lead to a much higher output than many individuals could. It is sure that such teams aren't high productive from the beginning. It is more a process of interaction which makes them so successful in the end. Groups are often used in companies to reduce the risk of failures (Sheard & Kakabadse 2005, p. ...read more.

The view of stages belongs to the theory of Tuckman (Kur 1996, p.27). This four stages model consists of the group-forming, storming, norming and performing phases. The stage model was developed by Tuckman regarding the investigation of therapy groups and according to Kur this model is not complete suitable for the development of work groups. Task and output oriented teams do not just reach all the stages step by step but rather change the direction sometimes. Kur is describing that a faces model would be a more adequate example to show the development of work teams. This model consists also of the forming, storming, norming and performing "face". Only the informing "face" as the first step is added in this model. According to Kur, groups are wearing different faces during the development process and they "move from one stage or face to another in a nearly random order" (Kur 1996, p.27). Thereby every change is seen as normal and a chance for the team to grow as it makes the team learning and more experienced. The first step of the faces model is informing as mentioned above. Here members are learning and thinking about their teamwork and values. It is a kind of organization to find out the most productive way to handle the tasks. ...read more.

But if they have too much trust it might be that group members stop to monitor each others in meetings so that the group will lose a lot of productivity that comes from interactive discussions (Morse 2005, p.19). Trust means that group members believe that the job of their colleagues is carried out well and satisfactory. It is right that this is an essential requirement of effective groups but it has to be considered that trust doesn't mean that the work of individuals isn't reviewed by other members. When team members don't know what is actually done by their colleagues it will create confusion in the coordination of further tasks and the team will work less productive (Morse 2005, p.19). To summarize, it is reasonable that the productivity of a group depends on their ability to work together. Group norms, group cohesiveness and communication have a huge impact on teamwork as it can be a barrier for interactive discussions or a way to take advantage of teamwork. To reach high cohesiveness and positive group synergy all the team members need to have a wide range of personal communication skills to assure that the communication doesn't lack. The more the group members like to work together the more the output will be affected positively. Henry Ford is quoted as saying "Coming together is a beginning. Keeping together is progress. Working together is success." (Harrell 2003, p. 198). ...read more.